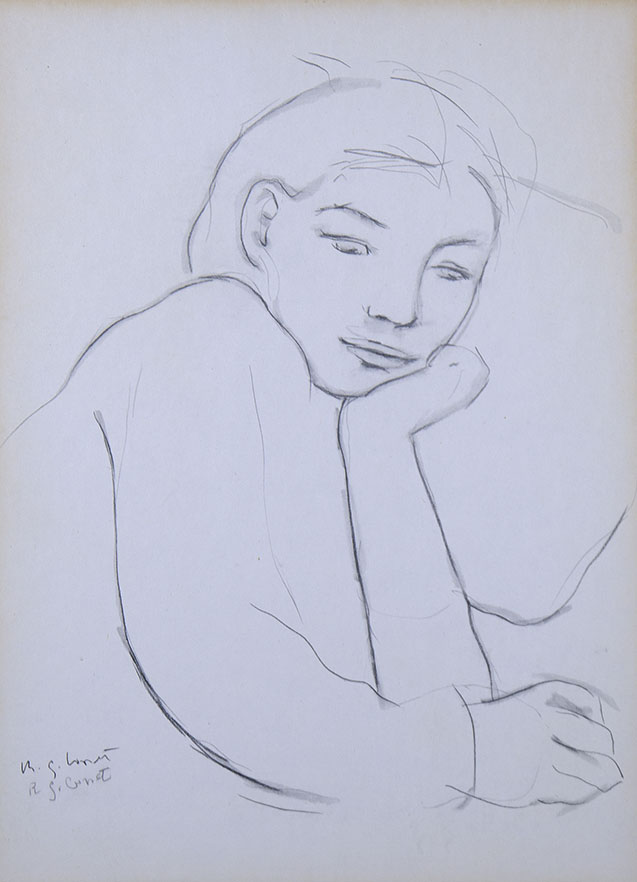 Torso portrait of a girl, lying on a pillow. Her body reclines on its side, leaning on one of her arms, while the other rests. To do it, Gómez Cornet first sketched it with charcoal, and later he traced the figure of a girl from the north of Argentina with graphite pencil. With a few lines and shadows, she captivates her deep, intimate and expressive gaze. Gómez Cornet dedicated his talent to the people and the cultural roots of the original America, which earned him the title of "Painter of the Earth.

Ramón Gómez Cornet, (Santiago del Estero, 1898 - Buenos Aires, 1964), painter and draftsman, was one of the forerunners of Modern Argentine Painting. Born into an important and prestigious family, Ramón Gómez Cornet was the son of Ramón Gómez, Minister of the Interior of Hipólito Yrigoyen and National Senator for Santiago del Estero, and grandson of Manuel Cornet Díaz, deputy for the National Congress of 1882. Precocious in art, he had his training at the Córdoba Art Academy and later continued his studies in Barcelona, ​​at the Libre Arts workshop, and at the Ranson Academy in Paris. He expressed the painter: A brief foray into 'isms' tempted me when I was young. Passion, the fervor of age, the need for new concerns, led me to travel to Europe. All this was filling my hunger for knowledge. I was in Spain, Italy, France, the Netherlands. I stopped to study the classical painters, and witnessed the rugged battles of the new painting. It was logical that a young man should not remain indifferent to the struggle for a new expression"..."But circumstances led me later, to the interior of the country, to my native province, Santiago del Estero, and to the rest of the north, of course. There, a crisis of overcoming was operated on me. I came across a new problem: man and our landscape. Such a decision earned him the place he occupies in the history of Argentine art. He won numerous awards, including the First Prize in 1937 at the National Hall with the work Muchachos Santiagueños, the Classic Art prize in 1939 with the work Portrait of Rosario (awarded for the only time in the country), and his consecratory prize, the Great President of the Nation Award from the National Hall in 1946 with the work La Urpila, now present at the National Museum of Fine Arts. In 1937, at the International Exhibition in Paris, he was honored with a silver medal.