THE STORY CONTINUES, THE 37TH NATIONAL CRAFTS FESTIVAL WAS HELD. 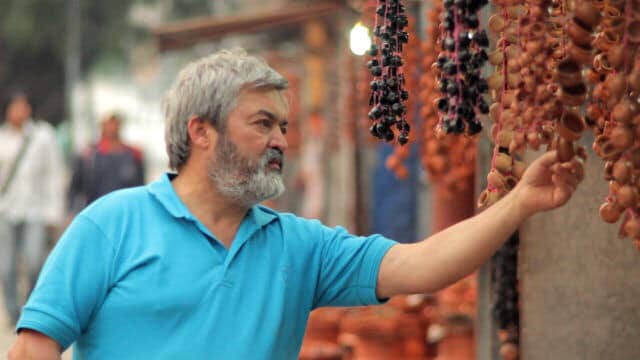 Hugo Da Silva, together with Avelino Bravo, the creator of the National Crafts Festival, and enormous support for its development. His memory was present throughout the agenda. 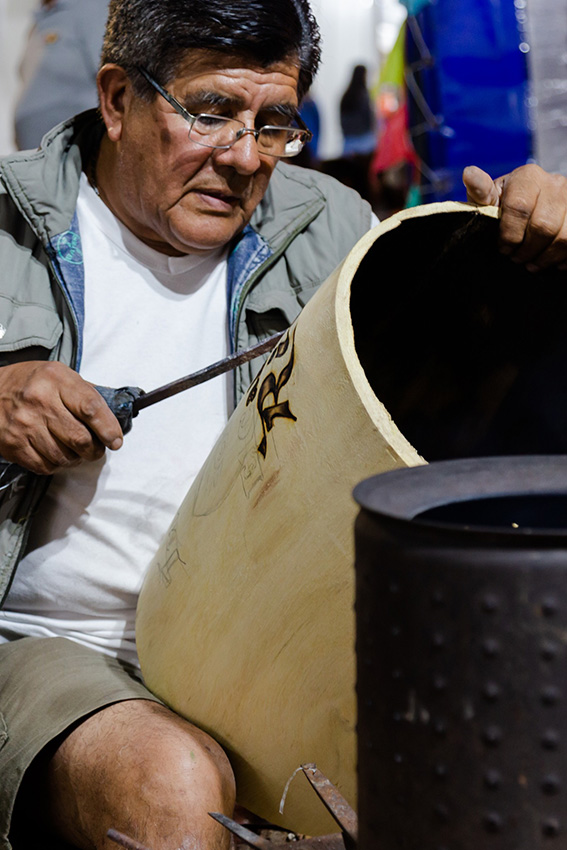 Alejandra Taritolay, master craftswoman from Animaná, province of Salta. One of the great entertainers of the Party. Photography: Municipal Press of Colón (E. R.) 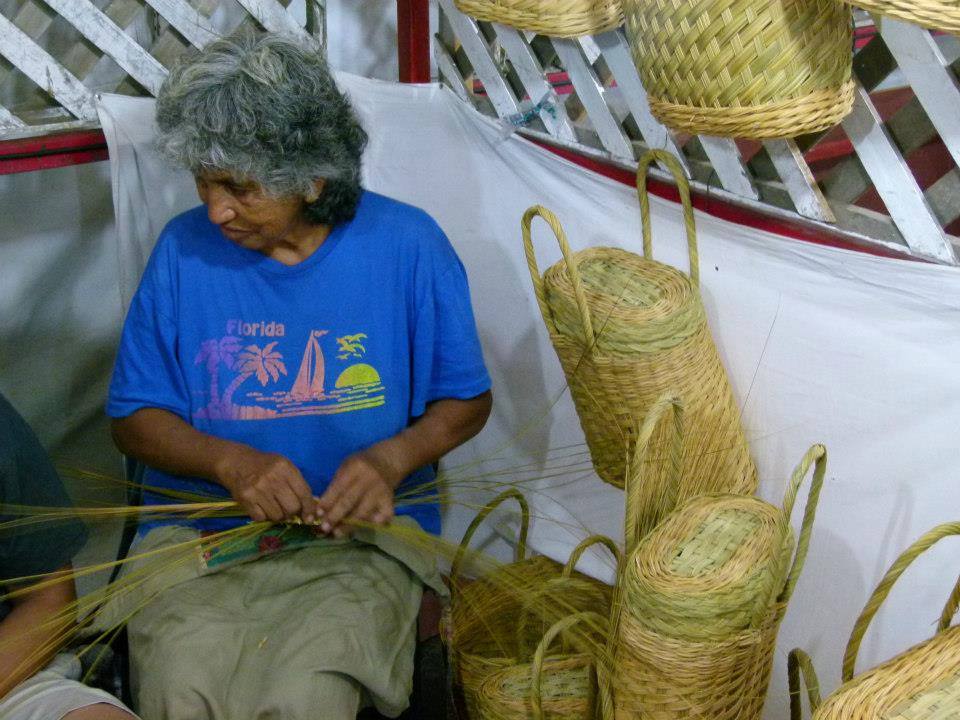 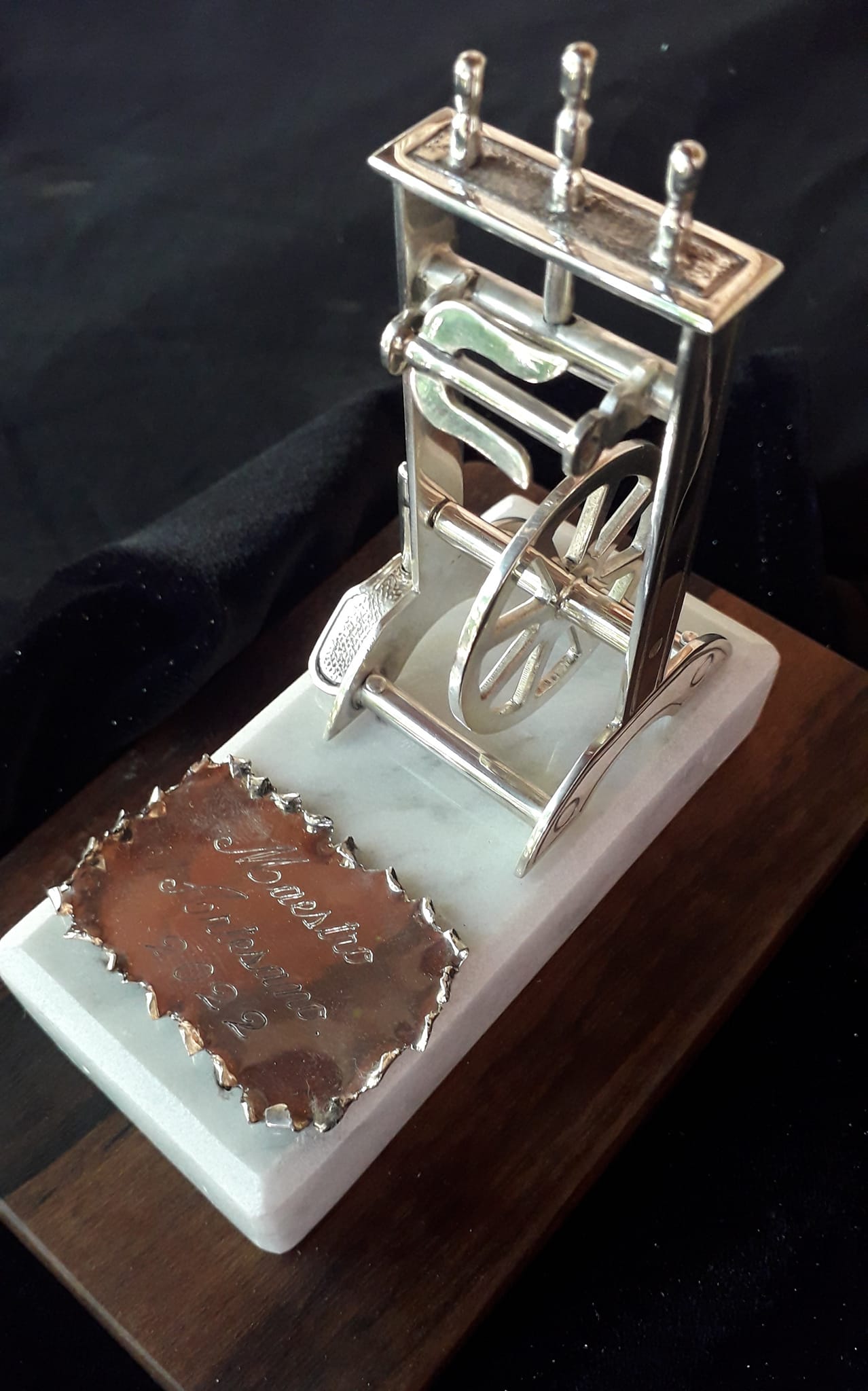 The Silver Wheel, the biggest prize. In each edition it is given to the Master Craftsman, the Qualified Craftsman and the Craft Production. In 2022, the chosen ones, in that order, were Cristian Tato Soriano, Gabriela Junco and Daniel Soler.

In his city, Capitán Sarmiento -province of Buenos Aires-, has served as Coordinator of Culture and Crafts, and since 1987, director of Municipal Culture, in addition to being the founder and coordinator of the National Meeting of Cahuané Artisans and Meeting of Young Artisans from the country.

It began the month of December of last 2021 and the expectation of the Argentine craftsmanship grew. The big question was: will the next February edition take place? Is it possible, without its manager, supporter and soul, the craftsman and leader Hugo Da Silva? On September 21, very shortly before, Hugo had left us after a cruel illness, and with his goodbye everything was pain, but also commitment and hope.

In that first moment of uncertainty, the municipal authorities expressed their will and desires, and through two true pillars such as Betina Di Pascua and Gustavo Da Silva -Hugo's eldest son, also an important artificer and sculptor-, the meetings gave way to the decision: the story must continue.

It was thus that, through the work of Betina and together with Gloria Campodónico, the selective instance of artisans to participate in the fair was carried out, the jury was appointed and progress was made with everything related to accommodation, talks and meetings, demonstrations, distribution of stands, tents, prizes, etc., while Gustavo was in charge of the organization and coordination of the Patio de Carvers. In addition, a whole team provided by the Municipality managed the complementary actions and was in charge of the Show on the main stage of the Festival.

It is to be imagined, the effort was remarkable, although it was impossible to hide the absence of the alma mater of this international meeting, especially in everything related to the crafts and their authors, Hugo Da Silva. Hugo's experience, knowledge, clarity, strength and power of synthesis in each of the aspects of the fair, is difficult to supplant.

For this reason, the great work carried out this year by the human group gathered from the organization around his figure deserves to be highlighted; in addition to the technicians and master craftsmen from different parts of the country, all very close to the festival, who made themselves available to it, developing a fundamental collaboration from the selective instances, the awards, the advice... And even, the performance of an Ethics Commission that also worked tirelessly to leave an important precedent in terms of the general evaluation, addressing aspects as diverse as the quality of the artisan presence, accommodation, tents, posters, advertising, etc.

The fair finally took place in good weather in general -an aspect of vital importance- from Saturday, February 5, to last Sunday, February 13.

One of the changes made by the current municipal authorities was the distribution of the tents. This time they were installed along Boulevard Ferrari, having a marked separation from each other, in the face of the pandemic period that we are living through; developing within the Quirós Park the important meeting of Carvers and the pompous musical show that the party has accustomed us to every night.

The opening act was very emotional and tempered the strengths. Different voices highlighted the conditions of Hugo Da Silva, this great cultural worker and master craftsman; they did it from the heart, from his experiences, and in front of his family. The emotion and the desire to continue his legacy brought us all together: thus, the first edition began without his physical presence, and the will to hold it in his honor was there.

The public, like every year, gathered marking the weekends with a massive presence, and especially, the days when the fair opened its doors in the morning hours and free of charge, once again revealing the problem that causes the high cost of tickets on the days that the schedule goes from 19 to 24 hours.

In one of the tents, the presence of artisans from native peoples stood out, presenting vital aspects of their cultures through different trades. This is how the provinces of Misiones, Chaco, Formosa and Salta attended with Qom, Mocoví, Wichí, Mbya Guaraní and Pilagá artisans, among others. In addition, different provincial and regional institutions exhibited, in two tents set up for this purpose, especially the Quitilipi Museum of Aboriginal Chaco Crafts, the Biennial of Chaco, the Artisan Market of the province of Jujuy, and the Capitan Sarmiento Soguería Workshop, Buenos Aires province.

When going through the other three tents in which the other artisans presented themselves, including those awarded in previous years, it was possible to notice that those summoned covered the thirteen items of handicrafts, although a marked decrease was noted in the crafts of antler and bone, stone and paper This signal, I understand, urgently requires the development of incentive, promotion, transmission and enhancement tasks, especially in these areas. Aside from this alert, the presence of qualified craftsmen/teachers, and of those who enhance the activity in their trade, gave the Festival the hierarchy that has distinguished it so far, and this year, the challenge was not minor.

In the 2022 edition, unforgettable for all of us who were and were part of its development, the textile industry was honored, taking place in a special tent, different demonstrations every day, with weavers, spinners, dyers and researchers. The different looms, the spinning wheels, the spindles, the exhibition spaces and even the books, dealt with such an important, ancient, traditional and contemporary trade, on this occasion under the motto "Weaving Life".

In another proposal of interest to the public, the great master craftsman Carlos Moreyra -a potter of enormous rank- and the young forger Facundo Fadón, carried out different workshops and live demonstrations, enriching the daily agenda with the title of "Tamers of Fire .

As is a tradition in the National Crafts Festival, there was no lack of talks and debates, coordinated by the Union of Argentine Artisans, addressing different aspects of the craft problem in our country, and providing an adequate framework for the presentation of books by Paul Bonaparte and Walter Maidana.

The different juries fulfilled an arduous task day by day in the selection of the winners, and it all culminated on the closing Sunday, with the classic barbecue and recognition among peers. Expectations, joys and emotions captivated all those present: artisans, authorities and jurors. There were special mentions and major prizes, the so-called "Silver Wheels", and the prize for the winners in El Patio de Tallistas

In such an intimate ceremony, the name of Hugo Da Silva ran from mouth to mouth, from tear to tear. It was there that, with great emotion, I was able to refer to him in front of the fundamental presence of the entire craftsmanship, together with Tere Castronuovo from Santiago del Estero and the master craftsman from Villa Gesell, Jorge Soto.

To end this special chronicle, outlined during the Festival and written a few hours after its closing, I believe and fervently hope that, in honor of Hugo, all of us, authorities, artisans, technicians and coordinators, must do our utmost efforts, and provide support and work, so that the Great Festival of Artisans continues forever in the place where that extraordinary person called Hugo Da Silva was born: the city of Colón, in the province of Entre Ríos.