Ángel María Zuloaga and his passion for books 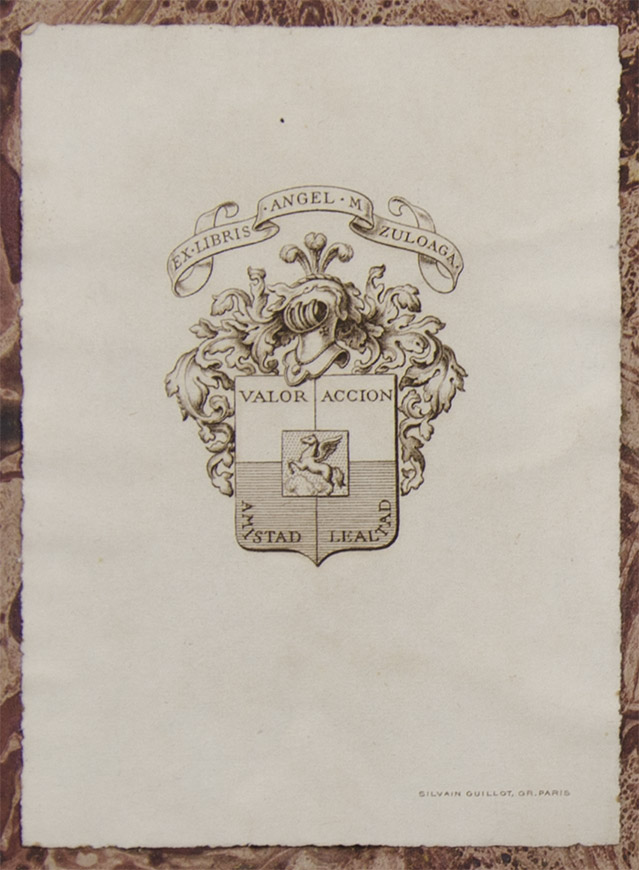 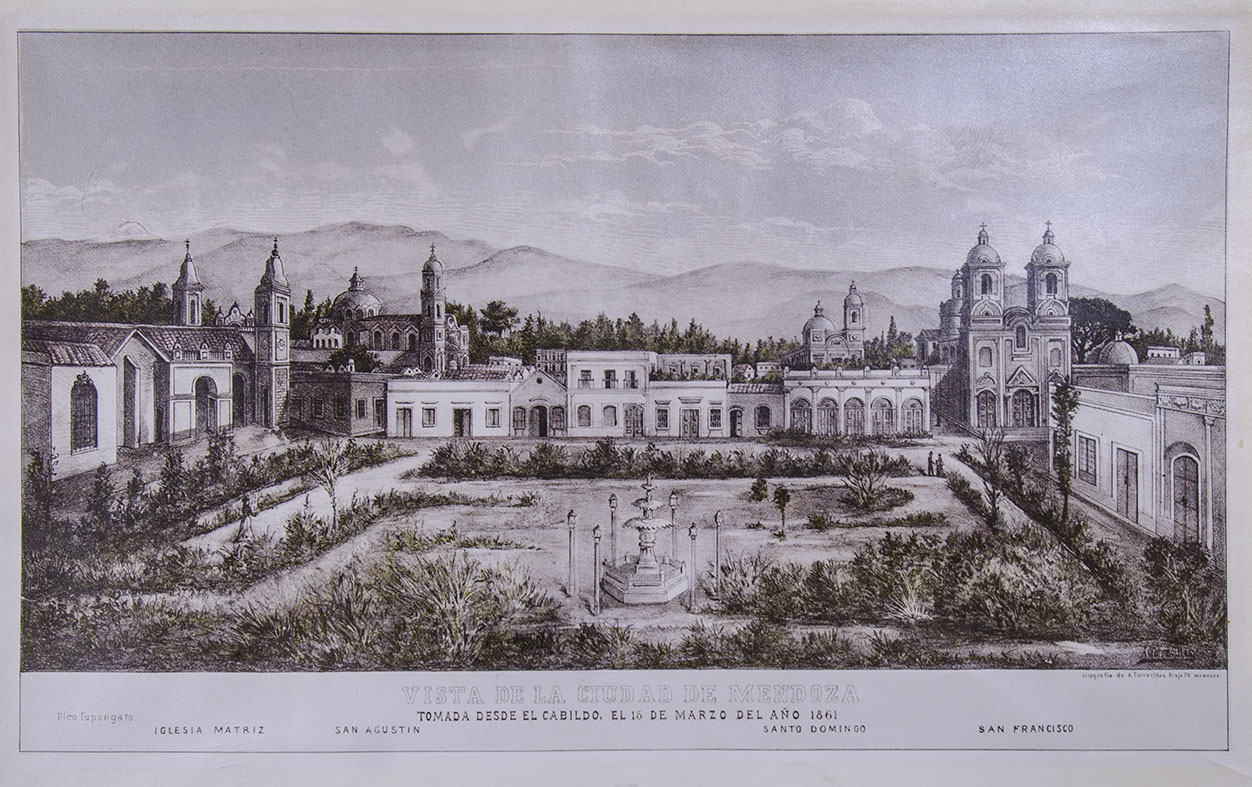 A. Torrecillas: View of the city of Mendoza taken from the Cabildo, on March 15, 1861. Former A. M. Zuloaga collection. 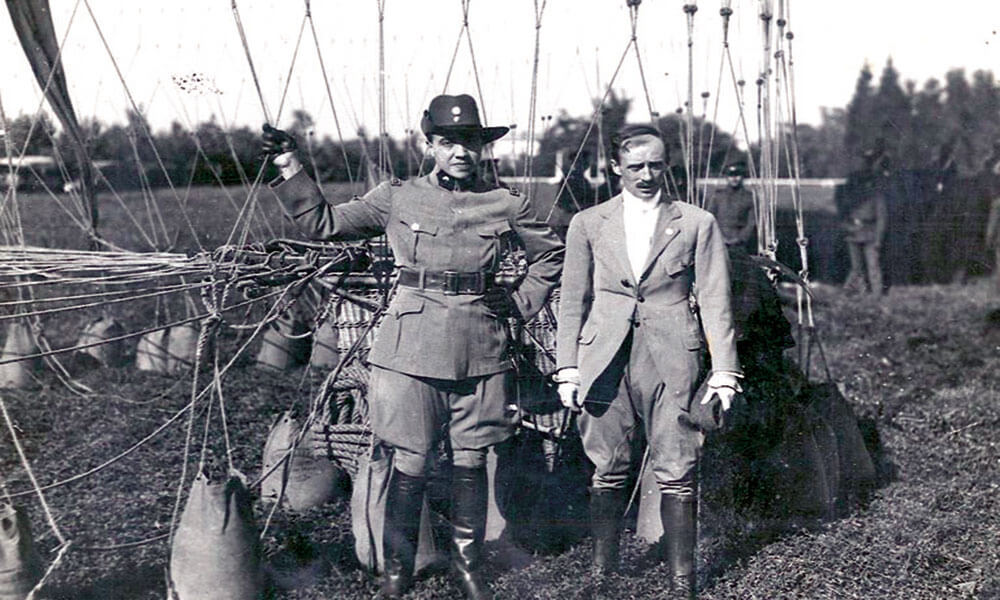 Aeronauts Zuloaga and Bradley, next to the balloon nacelle where they made the ascent. (The image and the news were published in Caras y Caretas)

Zuloaga (1885 - 1975), of Mendoza origin, was one of the creators of the national aeronautics; his feats in the air allowed him to break South American records (1), cross the Andes for the first time over its high peaks in a hot air balloon, direct the Military Aviation School and much more. Taming the sky was undoubtedly his great desire, but in his daily chore another task awakened illusions and pleasures: enjoying reading in his favorite place, the library.

His preferences went beyond the texts referring to the techniques and art of flying from the first epic essays today; he enjoyed travel stories and works of poetry and stories. Every book published in the 20th century that came into his hands, he went to the bookbinder who, preserving his original covers, dressed him with elegant leather spines and gilded titles. On the contrary, he wanted the editions of previous centuries incorporated into his library to preserve the original bindings. Each copy received its ex libris - printed in Paris by Silvain Guillot, a heraldic engraver active since 1885 - and was placed on the shelves. Precisely in that room and entertained with a book in hand, he received a visit from the crew of Apollo XI on one night in 1969. We will tell you details of this story.

Being a good reader and author of manuals and essays on aviation history and techniques, we find him among the founding members of the Argentine Institute of Aeronautical History Jorge Newbery. Zuloaga loved his books and also collected prints; among them, old views of Argentina and illustrations of the most famous hot air balloons. Framed or in folders, they were part of his space. That passion, however, did not limit his willingness to donate more than three thousand volumes in 1954 so that the National Aeronautical Library was created, and that gesture was expanded with other charitable gifts made by Zuloaga himself and by his heirs.

As that pioneer of aeronautics did, we can talk about other Argentine personalities who built wonderful libraries, which in the end survived with different luck. Three of them, created by former presidents of the Nation, remain in as many public reservoirs, at least partially. That of Nicolás Avellaneda is kept in the Sarmiento Historical Museum in Buenos Aires, although it is known that a neuralgic part of it was sold to pay for his trip to Europe in search of specialized medical care. (2) And that of Bartolomé Mitre, the fruit of a law enacted a year after his death, is preserved in his house converted into the museum that bears his name in Buenos Aires, while that of Agustín P. Justo left for Lima before the indifference of the Argentine authorities, and in the Peruvian capital it was incorporated into the patrimony of its National Library, decimated shortly before -on May 10, 1943- by a voracious fire. With a similar fate outside our borders, Ernesto Quesada's library -more than sixty thousand volumes- is conserved together and cataloged, but in the Ibero-American Institute of Berlin.

On the contrary, made up of diplomats, scientists, businessmen and journalists, numerous libraries were dispersed in anthological auctions, such as those of Estanislao Zeballos, that of Alberto Dodero -auctioned in London- and that of Dr. Enrique Arana (s), with its twelve thousand volumes, all signed and sealed with its bookplate, finished in 1935 here in Buenos Aires.

Diverse destinations for so many treasures... Days ago, we had access to a few volumes still installed in the personal library of Brigadier General Ángel María Zuloaga, and with excitement we acquired and cataloged them to offer them to travel towards their new homes. Among them, a view of Mendoza before the 1861 earthquake that activated a revealing study starring Abel Alexander, and presented under the title Mendoza's iconography and an elusive lithographer: A. Torrecillas.

Two hard heads (3) that made history

In Mendoza that pilot had been born twice; in 1875 and 1916, when after crossing the Andes mountain range on its highest peaks -Aconcagua and Tupungato- he landed the Jorge Newbery hot air balloon in Argentine territory. Together with the balloon pilot Eduardo Bradley (1887 - 1951) they carried out this madness convinced that, at the top, the air currents were moving from the west to the east, allowing the trip from Chile to Argentina.

They did so on June 24, 1916; Barely warm and protected with a precarious oxygen mask, they began the flight at 8 in the morning on a calm day, on the outskirts of Santiago de Chile. To make the balloon rise as necessary and complete the journey, they had to remove the sand ballast and get rid of all the non-essential elements, including a revolver and its ammunition, and even the scientific instruments, except the barograph, sealed by the authorities. Chilenas, where altitude and temperature were recorded. In the most complex moment they climbed to 8100 meters above sea level and faced a temperature of 33 ° C below zero, but already happy in Mendoza territory, they began to worry about the descent and landing, for whose maneuvers they were deprived of the normal elements, and the terrain was rugged. They had descended to 4000 meters with excessive speed, and were driven violently and in dizzying turns by the characteristic gales of the high ravines (...). Finally, after a series of incidents, they landed at 12 o'clock, Chilean time, on the edge of an abyss, a dangerous situation in which they were taken out by some brave creoles who arrived by mule from the Uspallata station. (4)

The feat traveled the world (5), and decades later led to an unforgettable encounter. The astronauts Neil Armstrong and Michel Collins, two of the protagonists of the first lunar walk carried out a few months before, had arrived in Buenos Aires and on the night of the presidential celebration, they took pains to conclude that formal appointment to approach the home of an elderly man 86 years old. Armstrong had read about his feat when he was very young and to him he was an idol; "Why did we want to meet him? Because we knew where we were going, and how we would get back, but they didn't, he declared. The meeting was endearing; Zuloaga gave them some anecdotes -"right here I spoke on many occasions with Antoine de Saint Exupery, he told them installed in his library, referring to his encounters between 1929 and 1931 with that legendary pilot, author of The Little Prince, and he gave them his book The victory of the wings, and the coffee cups where the national coat of arms and the Eduardo Newbery globe with which he made the crossing were engraved, wells that today are preserved in the United States Space Museum, except for one of them, which Armstrong he kept for himself among his most precious memories. (6)

2. We appreciate the information provided by her descendant, the bibliophile María Marta Larguía Avellaneda de Arias.

3. When leaving from Chilean soil, Zuloaga and Bradley heard that one of the witnesses said goodbye to them with a "goodbye, hardheads.

5. Eduardo Bradley published that experience in "The crossing of the Andes in a balloon" (Buenos Aires. Ed. J. Peuser. 1917)