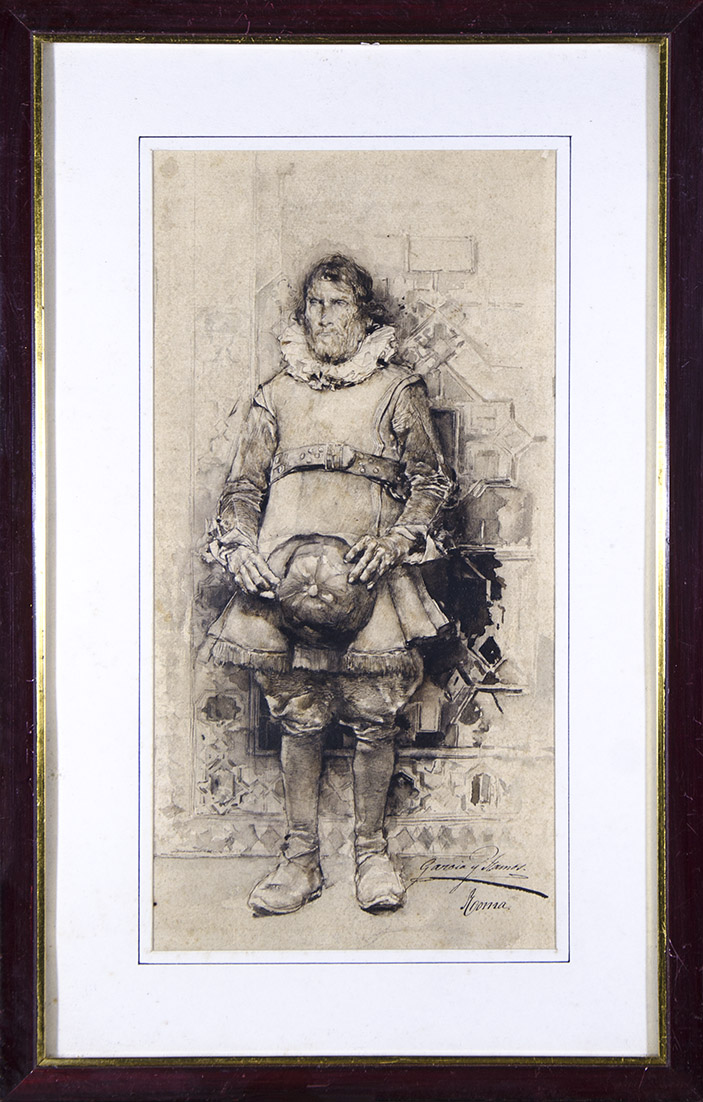 Gentleman dressed in the European fashion of the 17th century, simpler and more comfortable than that used in the previous century. Boots replace traditional shoes. The influence of military clothing is observed in civilians, as is the case with this gentleman, who does not have weapons. The pants, loose to the boots. Ruffs and lace sleeves are also simplified, and long beards begin to be worn and hair is allowed to grow and hang wildly. This fashion was prosperous among wealthy citizens in the Netherlands, and in France it was called "musketeer style", spreading throughout Europe.

The character holds a semi-cylindrical hat in his hands and is standing in front of a wall with the typical Andalusian geometric ornamentation of his native Seville. In 1872, in his early twenties, García y Ramos traveled to Rome to continue his studies with his teacher Jiménez Aranda, and there he earned a living changing Andalusian landscapes and scenes at a time of artistic effervescence in the city after his capture. in 1870 by the troops of the Kingdom of Italy. This work could well be one of those made in that period, since it is under the signature consigning "Roma". Historical costumbrismo painting, the so-called de casacones and the historical genre of minor tone -unlike the visual machine of history painting- had a large market niche, parallel to regionalist costumbrismo painting. Its success was sustained by a strong technical mastery of artists and by the commercial expansion of texts on local pasts and historical novels. In this regard, the Sevillian García y Ramos was one of the usual signatures that circulated in Buenos Aires, hand in hand with the art dealer José Artal.

Painter and illustrator - he worked in publications such as La Ilustration Artística, La Ilustration Española y Americana, and Blanco y Negro- José García y Ramos (Seville, 1852 - 1912), was one of the most significant exponents of Sevillian painting in the second half of the 19th century and Andalusian costumbrismo. He was a disciple first of Eduardo Cano, but primarily of José Jiménez Aranda, with whom he traveled to Rome. There he was influenced by the legendary Mariano Fortuny. In 1882, after passing through Naples and Venice and a stay in Paris, he returned to Seville, where he was appointed professor at the School of Industrial Arts and academician at the Royal Academy of Fine Arts of Santa Isabel de Hungary in Seville. His fame was the result of his realistic manners, contrary to the romanticism of his predecessors, the image of Seville created by foreign travelers. The Museum of Fine Arts in Buenos Aires preserves the work El Rosario de la aurora, painted in Rome in 1877.