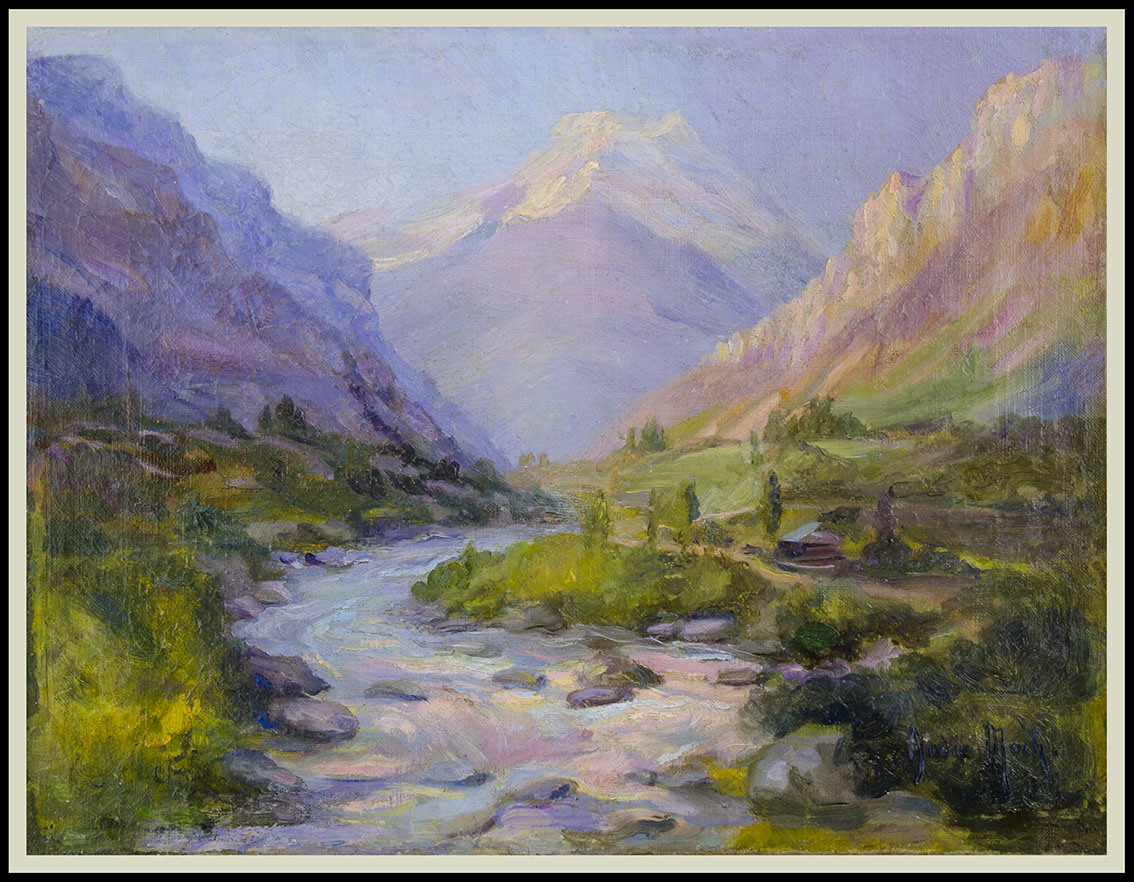 Oil on canvas, signed on the right, below. Measurements: 33 x 43 cm / 13 x 16.92 in. The title of the work is preserved partially written on a strip of paper glued on the frame to the back of it.

Landscape made with free, fast brushstrokes and in a vibrant color palette. Aconcagua, the highest point of our continent with its 6962 meters, "the roof of America", is here enthroned in a concentric and symmetrical perspective. All the diagonals, each element that makes up the painting, lead our gaze towards it. On both sides some hills, the one on the left blue, in the shadows; the one on the right is warm, sunny, and below them, two valleys with intense vegetation, where a construction stands out. In the center and in the foreground is the rocky Río Blanco, in whose undulating water mirror reflects the eternal snows of the imposing Aconcagua. On his travels he portrayed it with excellent technique, moved by the majesty of the landscape. (1)

Andreé Moch (Paris, 1879 - Buenos Aires, 1953) was a French sculptor, painter, writer and art critic, who arrived in Buenos Aires in 1909. A pioneer woman in the field of visual arts, she was one of the first women to be admitted to the Municipal School of Fine Arts of Bordeaux. Her talent allowed her to continue her studies at the École des Beaux-Arts in Paris, becoming, once again, one of the first women to be accepted. In 1905 she exhibited at the Salon des Artistes Français, in 1906 at Amis de Beaux Arts, and in 1933 at the Rellinger salon. Her adventurous spirit led her to live in England and Spain, where she successfully exhibited her works, and in 1908 she undertook her trip to our country with the purpose of making a monument to Guillermo Brown, a project that did not materialize, however the decision already she was taken: Buenos Aires would be her new home. Here she developed an intense activity in the field of art, journalism and politics; she was active in socialist and feminist groups; she participated in the magazine Unión y Labor; and she was particularly linked with the Basque community through José Rufo de Uriarte, founder of the magazine La Baskonia. He installed his first painting and sculpture atelier, and his work was widely known in art circles of the time, including the Witcomb Hall, where he exhibited in 1908 and 1937. He also created her own painting academy, in which she taught landscape and portrait. She is also notable for her numerous reviews of national and international exhibitions, book reviews, and translations from French to Spanish. In 1939 she published her autobiography Andanzas de una Artista.

Her work is very difficult to find, it is now present in the exhibition The accidental canon. Women artists in Argentina (1890-1950) curated by Gluzman. (2)