ED SHAW, THE GREAT COLLECTOR OF ANIMATE AND INANIMATE FRIENDS.

At home in Santiago de Chile, with some of his treasures. 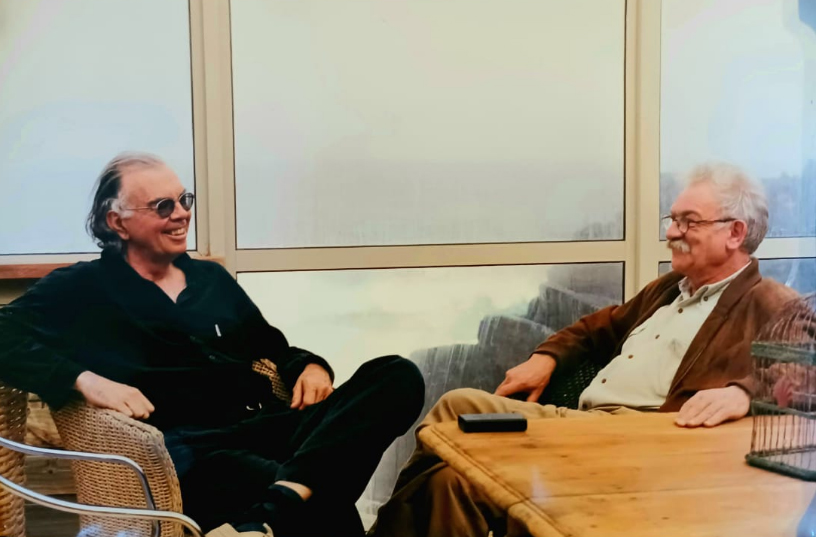 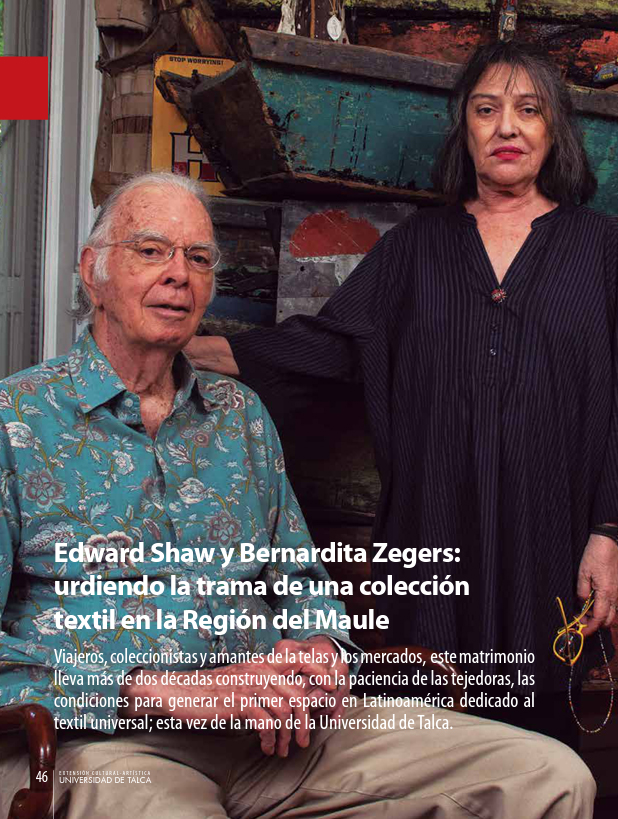 New Year's Eve dinner, on December 31, 2019, in the department of Santiago de Chile, in front of Cerro Santa Lucía. At the head of the table, Ed and next to him, Bernadette Zegers; to the left of both, the author of this semblance. 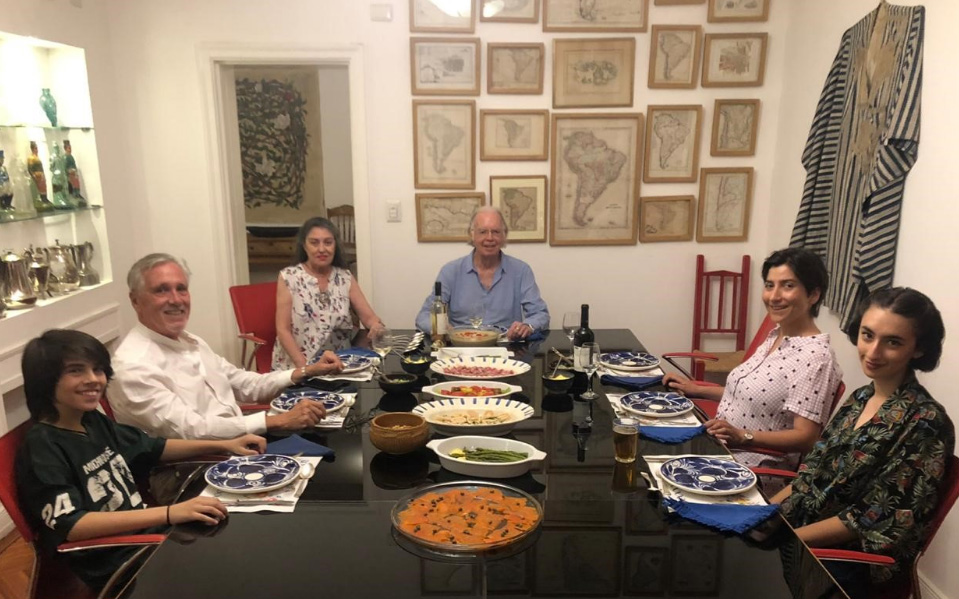 How has it been for you to get rid of such a significant and almost biographical collection?

It didn't cost us anything, it wasn't painful at all. We feel a lot of joy, a lot of pleasure and a lot of gratitude also because it is well scrubbed for the receiver. They give you an avalanche of things that require care. Where does the pleasure of donating lie? In transmitting, in going to a state University, where it is free; where anyone can enter. That a migrant enters and feels reflected and that at the same time others recognize their culture.

(Text published in the magazine of the University of Talca, 2019, Year 5, N° 9, pp. 34 - 44, with the donation of the textile collection of Ed Shaw and Bernardita Zegers; the answer was from his wife, both formed this collection with the patience of the weavers). 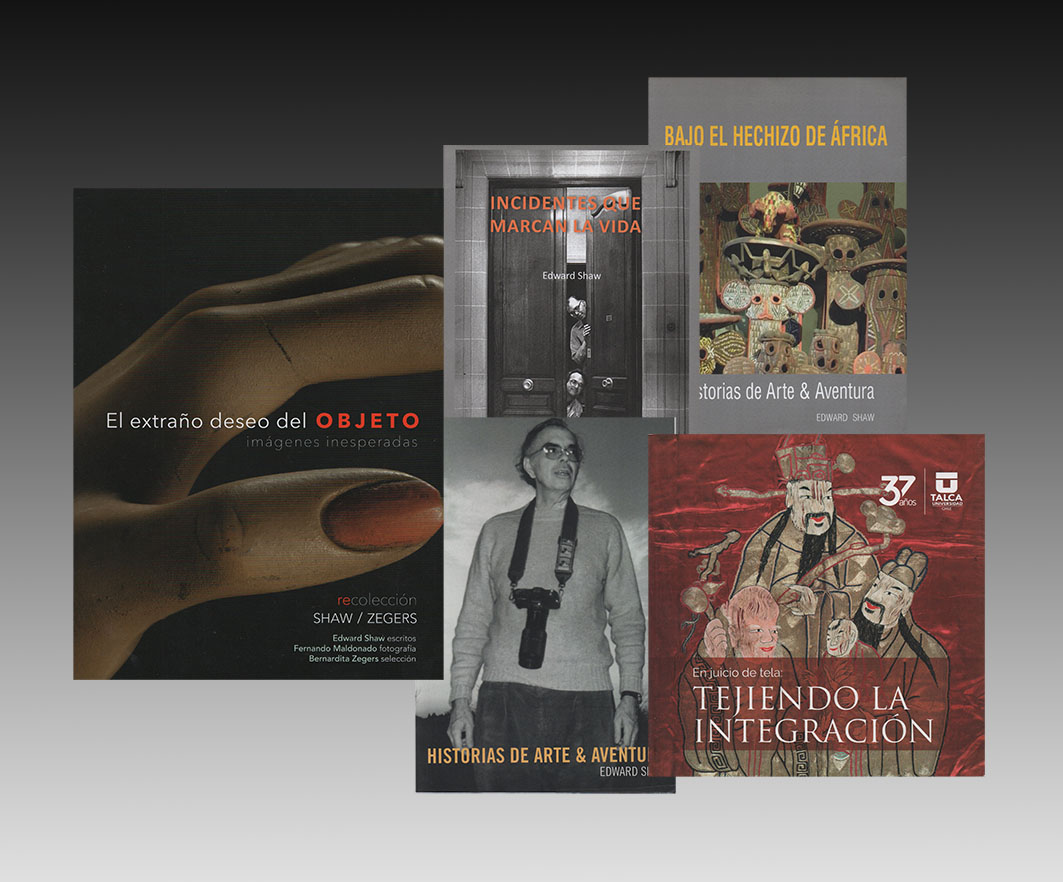 Books of his authorship and catalog of the Shaw / Zeger.

Architect graduated from the University of Buenos Aires, he was a professor in the Chair of Visual Systems I and II of Arq. César Jannello, professor of Morphology in the architecture career of the Torcuato di Tella University and founding partner and president of DarA (Decorators Argentinos Asociados) and his Foundation, among different activities related to his profession.

He represented Argentina before CECAL (Center for Color Studies for Latin America), and was a member and vice president of the Board of Directors of the Friends of the Museum of Modern Art Association.

Among other distinctions, he received the La Nación Award for decorators over 35 at Casa Foa 1994, Mention at Casa Foa 1996, Mercedes Malbrán de Campos Award at Casa FOA 2001 for Architecture and Interior Design, and Windows to the Future of Architecture Award. Cayc-Parex-Klaukol Award for Merit in 2011.

In 2005, he published Design as Poetics, the thought of César Jannello, under the auspices of the National Academy of Fine Arts and the Graham Foundation of Chicago.

He was in charge, as an advisor, of the definition of all the textiles in the Teatro Colón room on the occasion of the refurbishment carried out by the Master Plan. Committed to the architectural heritage, he works in different public and non-governmental spheres.

He works independently on projects and construction management for furnishing and interior design in Argentina, Uruguay, Chile and Peru.

I was born into a kind of United Nations created and cultivated by my paternal grandfather, Albert Shawon a spacious property on the Hudson River waterfront, outside of New York. My childhood companions were the group of people at his service, the closest ones, the gardener who came from the South of Italy and the Finnish carpenter who took care of the three big houses he was in charge of. The couple who cooked and waited in my grandfather's dining room were black, which was rare in our community. My grandfather had hired Willa and her husband on the farm in the South Country, before they traveled north to work on their new home there. The shed was full of treasures, little relics of two generations of acquisition and discard. I loved rummaging through trunks, boxes and shelves.

A whole profession of faith from someone who would become a great collector of art, objects of all kinds, and also of friends and places.

In 1963 he married María Padilla, with whom he had two children, Tom and Tania. His houses in Buenos Aires and in Colonia were always places of lively and crowded meetings of artists, travelers and intellectuals. Borges participated assiduously, with his translator Norman di Giovanni, who used to stay in that house.

Among the multitude of projects and activities that he undertook, I want to highlight two for his indelible imprint on the culture of Buenos Aires.

On October 18, 1995, the Borges Center was inaugurated in the old Galerias Pacífico building. The agreement with the State required that a part of the complex be dedicated to cultural activities, without official subsidy. The dealers turned to Roger Haloua, whom they knew from his business activities and his interest in culture. And Roger, friend of Ed's early youth, whom he met in his military service in the United States, invited him to share the challenge. Ed hesitated and wanted to avoid the assignment. "Wait, I'll check with Maria," he said. María appeared and ruled: "I think it's worth it."

They proposed a multimedia center, with workshops for artists, exhibitions, tango, photography, music, dance and theater workshops. This is how the Center was born, which was financially self-managed for 26 years under the direction of Roger. Ed made available his seasoned artistic judgment and his many local and international contacts, which allowed, among many, the visit of Tom Messer, director of the Guggenheim, the exhibition of early work by Lucio Fontana, and the first local exhibition of work by Andy Warhol.

With works from his collection, he organized the exhibition of his great friend Antonio Seguí, and with his photographs and those of his son Tom, he revealed to the public the unknown work of the engineer Salamone, today declared a National Historical Monument, which populated the streets with almost sculptural buildings. cities of the province of Buenos Aires in the '30s.

As an American citizen and journalist, Ed had the opportunity, closed to Argentines, to visit the Malvinas after the war. He photographed and investigated the life of the islands, which led to the making of some boxes with Malvinas memorabilia, of his authorship. He located the only Malvinian dedicated to art in those desolate places, and produced the exhibition "From the South", promoted by the then Foreign Minister Guido Di Tella and curated by Ed himself, which brought together in 1999 at the Borges Cultural Center works by the Argentine Andrés Waissman and Malvinian James Peck, in a gesture of rapprochement that is as necessary as it is infrequent.

The discovery of the solitary and beautiful beaches near Colonia del Sacramento in Uruguay, and the old neighborhood of that city, which was in a state of abandonment and deterioration, was another decisive gesture. He acquired a wonderful mansion from the end of the 19th century, on Ferrando beach, which stands alone in front of the river, and later the ranch house that the family still owns in San Pedro, with a very large gallery from which one can enjoy a sunset of unforgettable sun, facing the waters of the Río de la Plata. A host of artists and intellectuals summoned and persuaded by his enthusiasm, settled in Cologne, and set the tone of the place for many years. María herself was in charge of setting up the Pulpería de los Faroles square, the pioneering and iconic restaurant that still exists today. Jorge Páez Vilaró, founder and owner of the Museum of American Art in Maldonado, was another passionate promoter of Colonia, and a great protagonist -the only Uruguayan- of those golden years.

At the end of the '90s, Ed began his stage in Chile. Separated from María, he met the one who would be his inspiring muse and his companion from then on: Bernardita Zegers, a pure-blooded Chilean, a sensitive and intelligent artist. They shared a love of adventure that took them on long journeys through distant and exotic lands in Asia and Africa, as well as the most traveled in Europe and America. Passionate about textile art, she encouraged Ed in the search for handmade textiles from the most diverse origins, but always of great interest and quality. This is how the collection that accumulated in their apartment in Santiago and in the large mansion that they built together in Tunquén, in front of a wonderful rocky area against which the waves of the Pacific burst, in a grandiose and incessant spectacle, was developed. 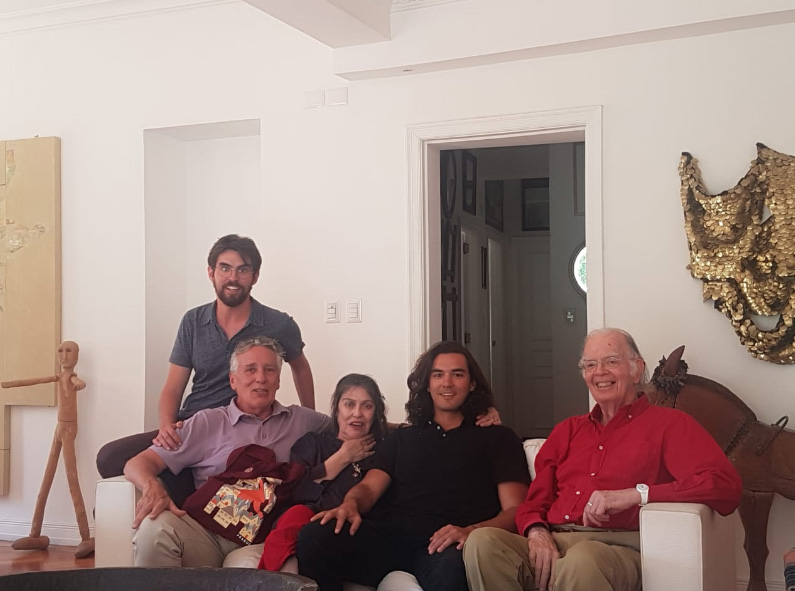 Germán Carvajal, author of this article (seated on the left), together with Bernardita Zegers. On the right, Ed Shaw. The two youngest, sons of Germán. (December 2018 photo)

We decided to join forces with the University of Talca to bring universal art to the Maule Region, they explain in Weaving Integration, a catalog by Edward Shaw and Bernardita Zegers, from 2018: We wandered without a compass through Bangladesh, Vietnam, China, Mexico, Morocco, Kenya, Turkey, Java, Malaysia, and a dozen more countries... to enter into the communion that unites lovers of thread intervened by fine fingers and infinite imaginations... We want to share the tribal and traditional wealth, with its iconography , its legends, in the interior of Chile... opening views and consciences to the vastness of the world... This exhibition illustrates aesthetics from five continents... Clothes mark territories. Álvaro Rojas Marín, rector of the University of Talca, highlights in the same catalogue, "the donation of the collection made up of more than 400 fabrics and a set of ritual objects... is complemented by nearly 10,000 titles from Edward Shaw's personal library, on issues related to art, politics and society in Latin America.

In his latest book The Strange Desire of the Object, from 2021, Ed prologues: I have lived my 84 years surrounded by books and objects. They separate me from everyday dramas. They have given me a subject to write for the last 70 years A painting on the wall reflects my selection criteria, a book the same. Everything ends up being a reflection of me. In this process of aiming at certain ideas and ideals enters the choice of friends. I divide the category into two: animate and inanimate...

The death of Antonio Seguí on February 26 last, undermined his already fragile vital impulse. He died in Santiago on March 29, very close to his 86th birthday, surrounded by the love of his wife, his children and his closest friends. Among them, many of the objects that he chose, treasured and loved.

A tireless explorer of art and culture, he lived the countries in which he lived as his own, without ever losing that lofty vision that the condition of world citizen, of essential man, can give.

A great reader, a good writer, a curious and insightful investigator, he knew how to make love and friendship the nourishing sap of his life. He could have said, with Amado Nervo: I loved, I was loved, the sun caressed my face. Life, you owe me nothing! Life, we are at peace!