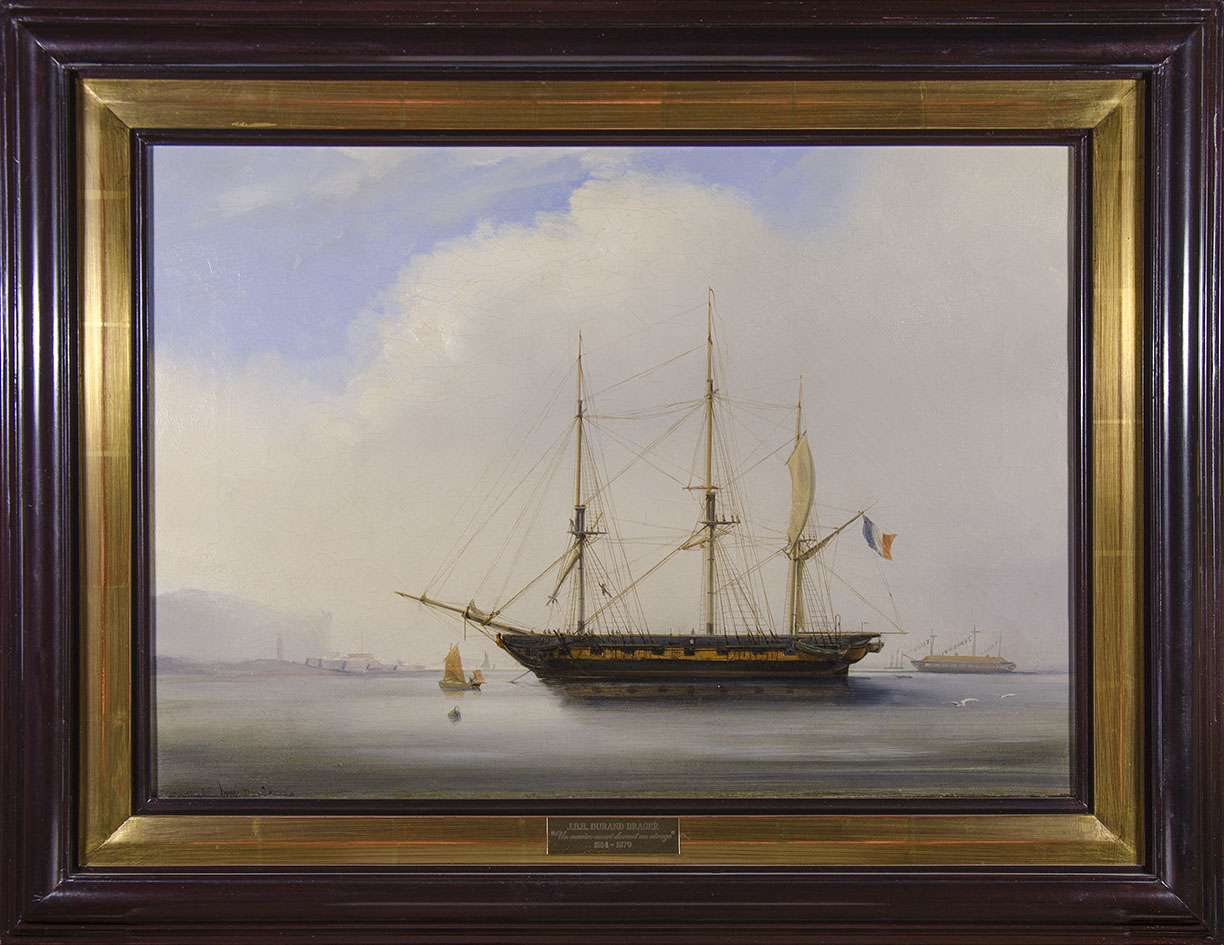 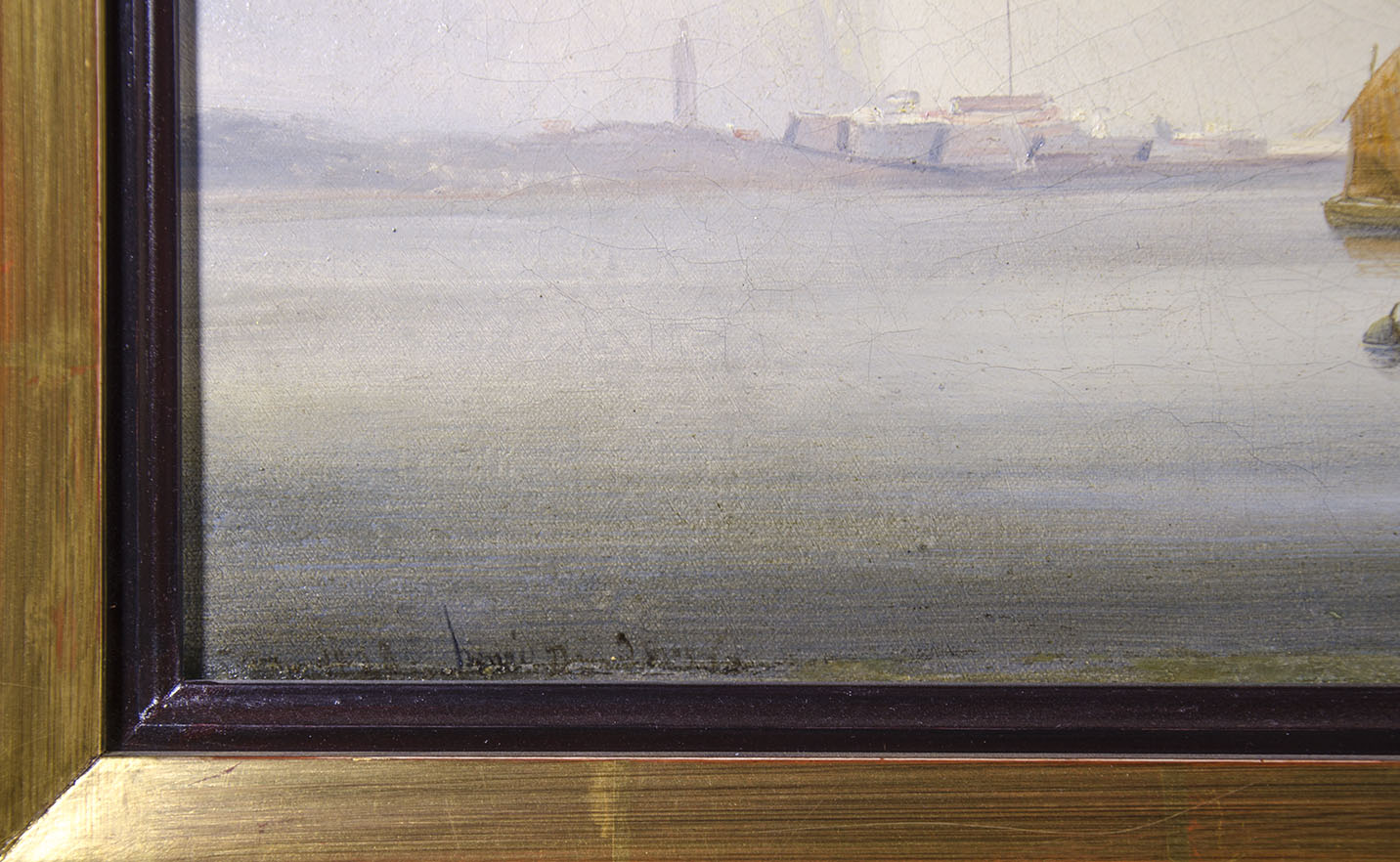 In the stillness of an estuary.

Beautiful naval scene. An artillery ship, with three masts -anchored and with its sails lowered-, occupies the center of the composition. Two crew members work next to the foremast, the mast closest to the bow, which is distinguished by its figurehead: a torso of a female figure that appears golden in the artist's brushstroke. The French flag flies on the ship. To the right of it a small boat advances with its sails unfurled. To her left, further back, another larger vessel can be seen in the estuary. In the distance, on the opposite coast, the silhouette of a tall tower -of a mosque?- ​​and a fortified construction. More distant, a rock mass is barely noticeable in the mist on the horizon.

Its author was the French sailor and artist Jean-Baptiste Henri Durand-Brager (Belnoe Castle, Dol, Brittany, 1814  Paris, 1879), artistically trained with Louis Gabriel Eugène Isabey and Théodore Gudin. He remained in the Río de la Plata between 1840 and 1842 embarked in the squadron of the French Admiral Mackau when the conflict between Rosas and the government of King Felipe was taking place, and said squadron blocked naval access to Buenos Aires. During those years Durand-Brager made several trips to the South, traveling along the Patagonian coast to Cape Horn and the Strait of Magellan.

Renowned mariner he recorded in the production of his assignments at French naval stations. The most outstanding collections of his work are in the Vieux-Chateâu de Laval museum and in the Versailles gallery, in addition to other outstanding works in the Angers Bordeaux and Nantes museums. In our region, in the Imperial Museum of Petrópolis (he was assigned to Rio de Janeiro in 1838) and in the National Historical Museums of Montevideo and Buenos Aires; here with four oil paintings, two views -that of Montevideo and of the Fort of Buenos Aires-, and two others that show the Naval Battle of May 24, 1842, in the morning and at night, both reproduced in lithography. Although smaller in his production, he also made costumbrista representations, highlighting that of federal soldiers in 1841. A curiosity in the regional collections is Puerto Argelino preserved in the National Museum of Fine Arts in Asunción. (one)

In 1844 Durand Brager was made a knight of the Legion of Honour, promoted to officer of the order in 1865. He appeared as a naval and marine historical genre painter at the Paris Salon between 1840 and 1848, obtaining a third-class medal. in 1844 with Combate de la frigate Niemen, and with one of the views of Rio de Janeiro, commissioned by the Prince of Joinville.

About his work as an illustrator, let's say that when Rosas was defeated and forced into exile, he used his notes to highlight the news about those events published in "L' Ilustration" of March 27, 1852, of which he He was a regular collaborator. Durand-Brager illustrated the successful publication Voyages et découvertes outre-mer au XIXe siècle by Arthur Mangin, among the drawings are those of southern Patagonia and those of the trip of the future Pope Pius IX, with several editions since 1863. Two years earlier there had been published Quatre mois de l'expédition de Garibaldi en Sicile et en Italie with text and illustrations by him, which he co-authored with de Champreux Deux mois de campagne en Italie in 1867. His lithographic albums, including those dedicated to the transfer of Napoleon in Saint Helena, the Crimean War -in which he also made from oil paintings to photographic shots- and Corsaires français, are examples of the fascination for the naval world in nineteenth-century visual culture.

1. Roberto Amigo. National museum of fine arts. The Godoy collection. European painting and sculptures. Asunción, National Secretariat of Culture, 2014. We thank this researcher for the information on the artist.