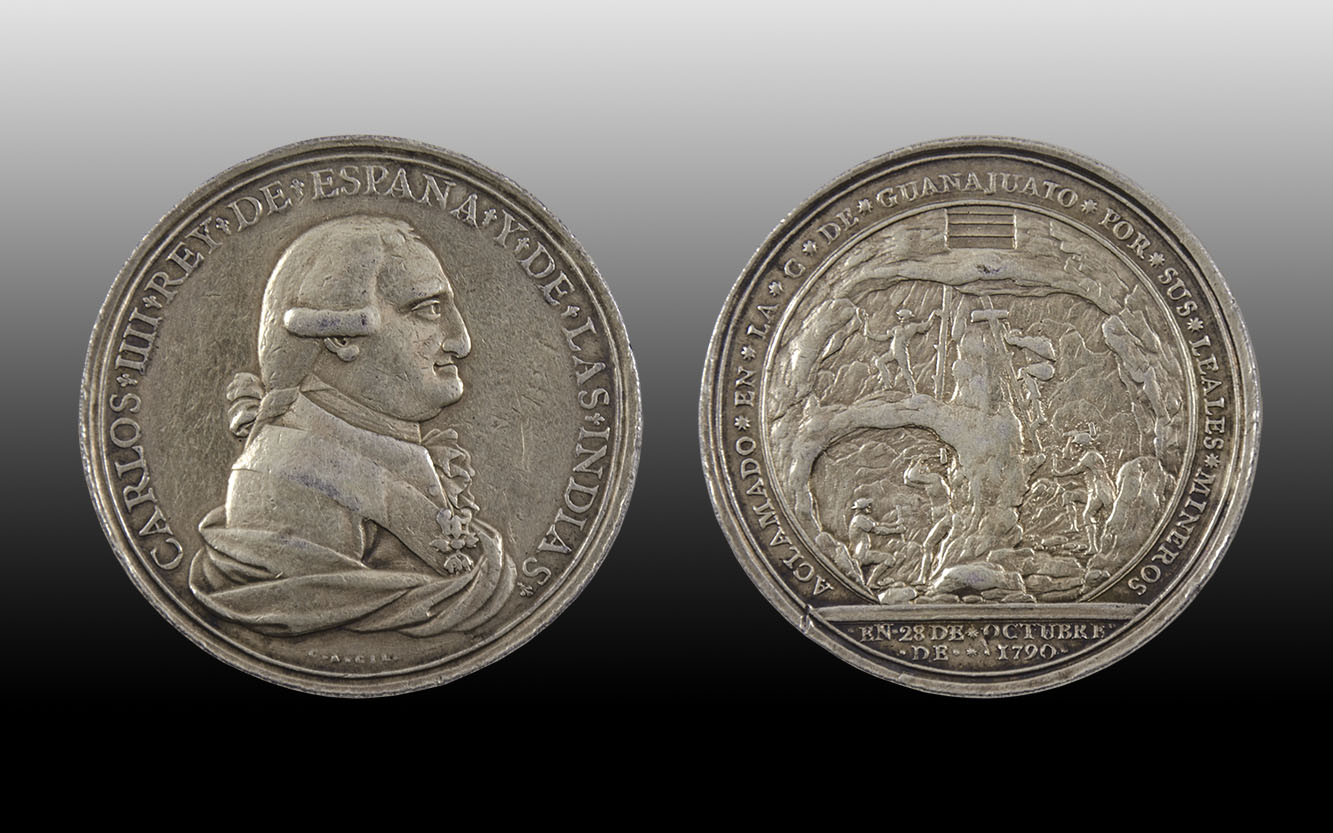 ONE OF THE MOST BEAUTIFUL IN HISPANO AMERICA

Medal for the proclamation of Carlos IV. Guanajuato, Mexico. 1790.

Recognized as one of the most beautiful in Latin America in viceregal times. Silver medal. Measurements. Diameter: 4.2 cm / 1.65 in. Weight: 52 gr.

Identified as the most important engraver of the colonial period, Gerónimo Antonio Gil (1731 - 1798), from Zamora, was one of the first students of the Madrid Academy of Fine Arts. "Because of his talent he was proposed for a position as an engraver in the New Spain Mint. After working in that place and giving engraving classes in the same workshop where the coins were minted, in 1779 he proposed to Viceroy Martín de Mayorga created a specialized school. Thus, on November 4, 1781, the Academy of the Three Noble Arts of San Carlos (painting, sculpture and architecture) was inaugurated, with Gil as its first director. (1)

"While working as an engraver at the mint -we continue with the source cited- Gil designed several of the most beautiful medals in New Spain. On the one created by the proclamation of Carlos IV for the miners of Guanajuato, it is stated: "This medal is considered one of the most beautiful of the colonial period. Its obverse has two varieties: in the first one appears the profile effigy of Carlos IV -the specimen we present belongs to this variant-, while in the second he is seen accompanied by Queen María Luisa. On the reverse side we can see the interior of a mine, in which a group of miners is in charge of different tasks. The legend is: Acclaimed in the city of Guanajuato for its loyal miners. In the exergue you can see the date: October 23, 1790. (2)

Guanajuato held an important celebration in honor of the proclamation of Carlos IV; "For this reason, a monumental platform was erected, built with exquisite wealth, to demonstrate the mining power. The local council of the guild mounted what would perhaps be the first mining exhibition in New Spain, in which the different machines used in the extraction and benefit of minerals. The celebration began with the walk of the banner for several days and during the acts, the town received a fabulous quantity of gold, silver and copper coins minted with the bust of His Majesty and symbolic images of the body of mining. The festivities continued with lavish banquets (...). " (3)

1. History of the medal in Mexico. Bank of Mexico.

2. History of the medal in Mexico. Ibid.

3. Eduardo Flores Clair: The dark side of silver. Life in the royal miners of New Spain at the end of the 18th century. On the Internet: http://estudiosamericano.revista.csic.es