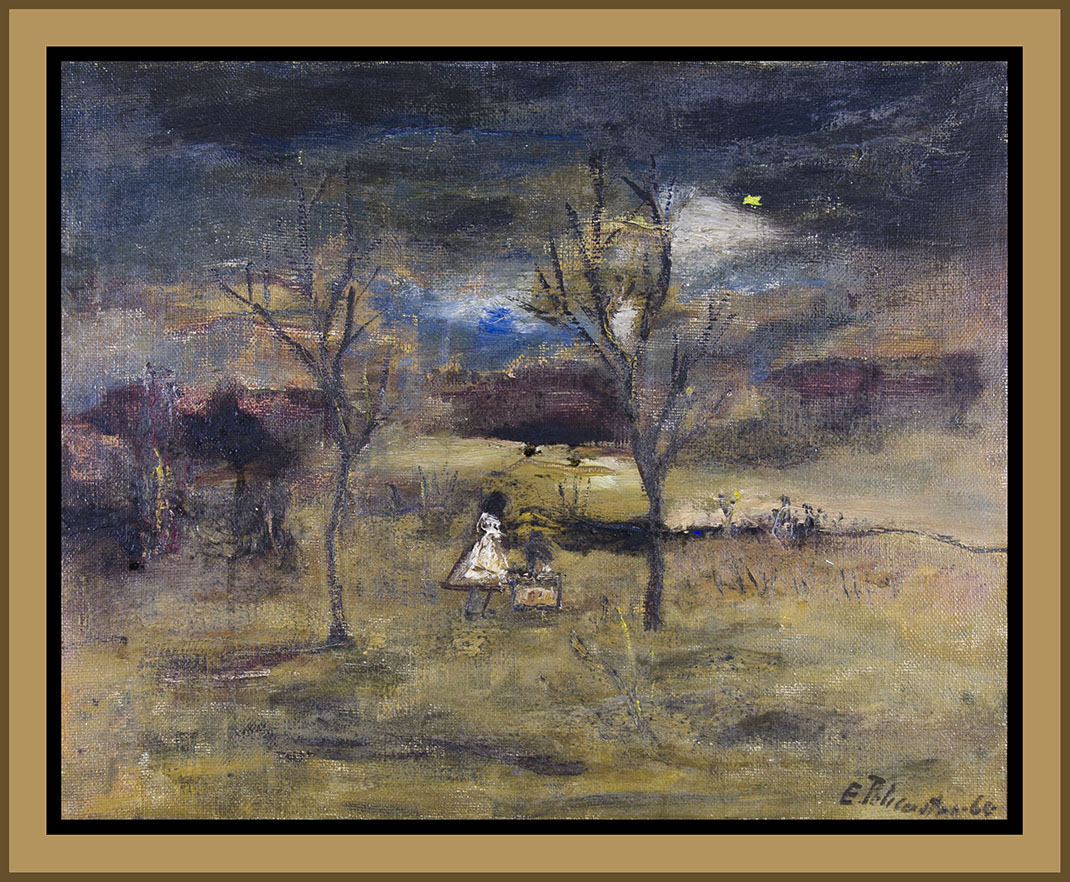 A girl in a white dress and carrying a basket inhabits a dramatic landscape. She bordered by two bare trees, behind her a line of mountain ranges, and above them a dense, dark sky. A thick stretch rustic fabric is the support for the rusticity of the landscape and the character. The plot is clear, visible, bare, in counterpoint with areas of great filling, volumetric -such as the white dress-, and others drawn with the end of the brush, removing paint.

Roberto Amigo's description of the Suburbio painting for the National Museum of Fine Arts brings us closer to the aesthetics and ideals of this artist: "Enrique Policastro, son of workers, self-taught, consolidated in the 1940s his own language made up of a sober, visually stripped-down palette defined by heavy impasto and iconography of tortuous figures, impoverished rural and suburban landscapes. As Alberto Collazo argued, Policastro can be understood from the category of realism understood, at the same time, as expressive synthesis and dramatic intentionality. Although the judgment that 'all of Policastro's painting constitutes the best plea for agrarian reform' may seem exaggerated, it is not wrong to keep it in mind when we observe his work: there is not a painful costumbrista anecdote but rather a political program in those landscapes of ranches, in the schematic figures, in the contrast between the sky backgrounds and the dense matter of the foregrounds, achieved through the application of pictorial layers, scraped with a spatula and a new addition of matter. He is an artist of realisms, in accordance with communist ideals and the thought of oppressed nations as an American identity. (1)

Enrique Policastro (Buenos Aires, 1898 - 1971) was an Argentine painter and illustrator linked to social realism and expressionism. He was part of the Boedo Group and the Argentine Society of Plastic Artists, of which he was elected president in 1947, 1948 and 1954. He was also director of Nueva Gaceta, a publication of the Association of Intellectuals, Artists, Journalists and Writers. He won numerous awards, and from an early age. In 1926 and 1929 he received the National Hall Stimulus Award; in 1930 first prize of the Hall of Watercolorist; in 1932 the Francisco Llobet Award from the Hall of Watercolourists; in 1935 first prize of the National Commission of Fine Arts and in 1942 Jockey Club prize of the National Hall, among others.