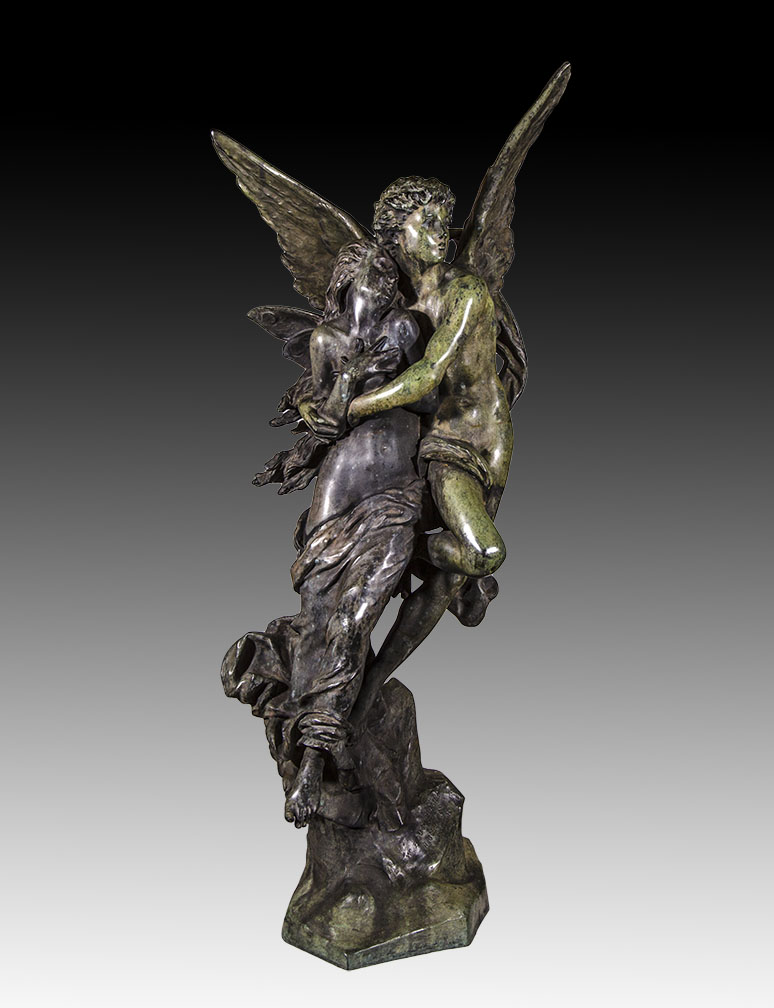 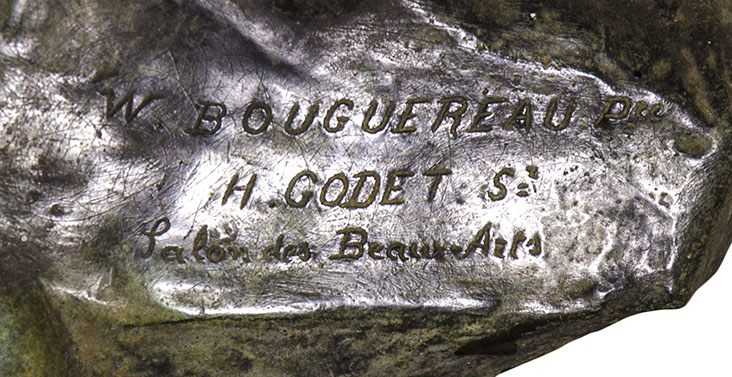 Magnificent cast bronze sculpture by Henri Godet, based on William-Adolphe Bouguereau's oil painting of the same name. We are facing a version executed by the Vrai house from the work presented at the Paris Salon in 1896 with the title Le ravissement de Psiché, d'après le tableau de M. William Bouguereau (no. 3488). The subject was treated with variations in other pieces by Godet, in Love and Psyche, presented in the Paris salons of 1901 and 1903, and in a diverse terracotta preserved in the Musée d'Orsay.

With technical mastery Godet brought to heavy metal the lightness of the image. It narrates the moment in which Cupid kidnaps Psiche to take her to the higher spheres of her. Legend has it -related by Apuleyus in The Golden Ass or Metamorphosis- that Psyche was the youngest daughter of King Anatolia. Aphrodite, jealous of her beauty, sent her son Eros to shoot her an arrow that would make her fall in love with the most horrible and mean man. However, Eros fell in love with her and threw the arrow into the sea; when Psyche fell asleep, he took her flying to his palace. Godet beautifully maintained the version of Bouguereau painted in 1895, the twisting of the bodies, the ruffles of the fabrics, the pointed bird wings of Eros and the small butterfly wings of Psyche, the sleeping and at the same time pleasant expression of her, the attentive flight to the top of him... It only incorporated a base that supports and counterbalances the composition that leans to the right. The work was presented at the Salon des Artistes Français in 1896.

Henri Godet (1863 - 1937) was a sculptor and engraver of medals, a student of Mathurin Moreau. He exhibited both at the Société Nationale des Beaux Arts (directed by Bouguereau himself) and at the Salon in the 1890s. He is known for his small bronzes of women, especially his "women-flowers", the decorative sculptures of him. S. On. 6. L6