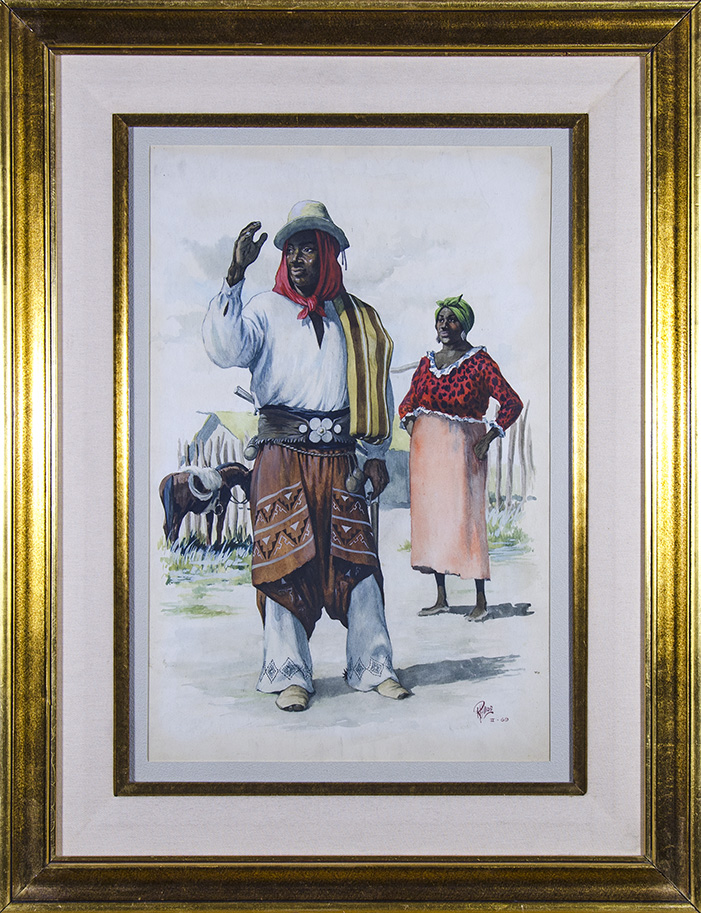 Black couple in the Martín Fierro. 1969.

In the foreground, he greets dressed with his gaucho clothing, chiripá, boxer shorts, a silver drag handle, bowlers tied to the waist and on the right flank the line of the protruding facón. He wears a white shirt and a striped poncho over his shoulder, a red scarf and a donkey belly hat. From his left hand hangs the whip. Behind her wife is with her hands on her waist, in a skirt and blouse with a V neckline and ruffles at the cuffs, neck and waist. At the head, a green scarf. Wears great earrings.

In the background there is a wooden palisade, and to the left, the ranch with its double-water roof and a saddled horse. The composition refers to the most important text in Argentine literature, the poem Martín Fierro by José Hernández. (1)

The piece was painted for his first solo exhibition illustrating the "Martín Fierro", an exhibition that was held in his hometown: Morón. Its author, the great traditional painter of today, has been working for many years in his atelier in Santa Coloma, province of Buenos Aires, where he takes the landscape, enjoys the country culture and carefully reconstructs his characters.

1. Among Afro-Argentines from the colonial trunk, the Martín Fierro was a reference book, despite the evident contempt of the black by José Hernández in his work. In the 1960s, two Afro-Brazilian entities testify to this: the so-called Martín Fierro Association, which came to have a soccer team, organize dances and conferences, and the so-called Friend Club, which organized its parties in a club room from the Balvanera neighborhood. It did it under the motto "Va ... ca .. yendo gente al baile", painted on a canvas that hung in the hall. (Information provided in a personal communication, by Norberto Pablo Cirio, researcher, university professor, specialized in studies on the culture and music of Afro-Argentines from the colonial trunk).