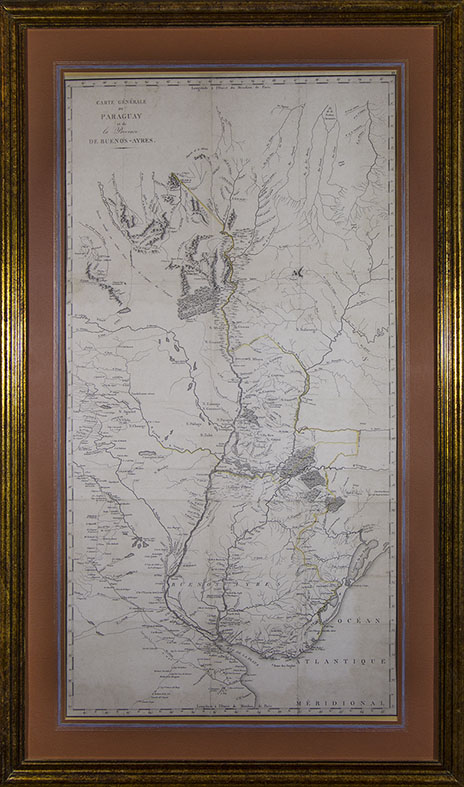 THE WORK BY ONE OF THE MOST OUTSTANDING CARTOGRAPHERS, THE WISE DE AZARA

It is the most important map included in the Azaras Atlas -its plate number 3-, which contains all the cartographic information collected by the author in his research work from previous sources as his own. The map covers a wide region, from the south of Buenos Aires to Paraguay, including most of the Jesuit missions.

In 1781, the Spanish engineer Félix de Azara (1746 - 1821) was appointed to integrate one of the scientific commissions that demarcated the boundaries between the possessions of Spain and Portugal. In that year he reached the Río de la Plata. Furlong said that "already in America, unforeseen delays -we noted that caused by the failure of the Portuguese commission- led him to undertake geographic work. His observations, of great rigor, finally distinguished him as one of the most qualified European travelers who explored our territory writing works of enormous documentary value.

Azara himself confesses that after setting out to draw a good map, he turned to natural history, transcending his initial field of interest, centered on historical and geographical knowledge.

After spending three years here, in 1784 he arrived in Asunción, where he established his center of activities, making numerous study trips, until in 1796 he received orders to move again to Buenos Aires, to return to Spain in 1801.