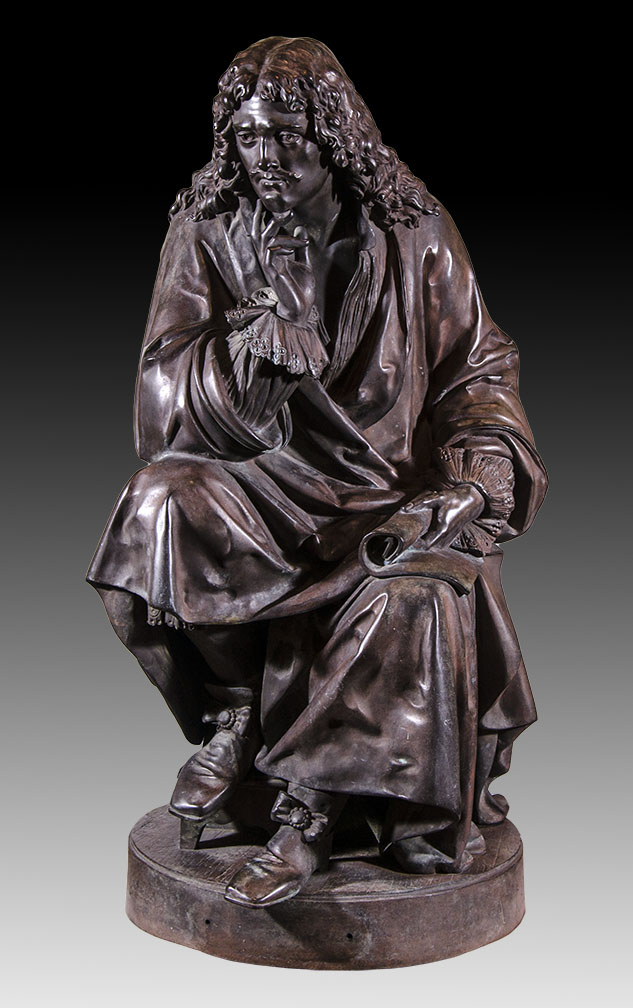 Sculpture cast in bronze with dark brown patina. Measurements. Height: 60 cm / 23.62 in. Depth: 36 cm / 14.17 in. Engraved in metal, the author: A. Carrier; the foundry house: E. Colin et Cie. Paris , and a foundry code or registration 843 and some letters of the artist's surname, a testimonial mark of the original model.

Bronze sculpture of the French poet and playwright Molière (Paris, 1622 - 1673), author of classic plays such as The Miser and The Imaginary Sick, considered the father of the Comédie Française. It is the bronze casting of the well-known Parisian house E. Colin et Cie, made from the plaster model presented by Carrier at the Paris Salon in 1878.

Sitting on a bench, Moliere holds a rolled paper in one hand, and with the other on his chin, he seems to go over the lines of a poem, or the lines of one of the characters in his plays, preparing to go on stage; Molière was also an actor. The set is supported on a cylindrical base of the same metal.

Albert-Ernest Carrier-Belleuse (Anizy-le-Château, 1824 - Sèvres, 1887) was a French sculptor -one of the most prolific artists of the Second Empire- and painter. He began as a goldsmith before entering the Ecole des Beaux-Arts in 1840 under the support of the sculptor Pierre-Jean David d Angers. In his studio on rue Tour-d'Auvergne, around fifty practitioners, including a young Auguste Rodin, were working on creating works in terracotta, bronze and marble. In academic style, he developed the female portrait, mythological scenes and historical figures, as is the present case of this Molière. His most famous work is a great marble Bacchante, today in the Musée d'Orsay. He also made monuments, such as that of Bernardo O'Higgins in the Plaza de la Ciudadanía in Santiago de Chile or the figure of General Manuel Belgrano in his equestrian Monument located in the Plaza de Mayo, and the Funerary Monument of General José de San Martín, both in the city of Buenos Aires, Argentina. The National Museum of Fine Arts -also in Buenos Aires- possesses a marble of his authorship with the bust of Manuel José Guerrico.