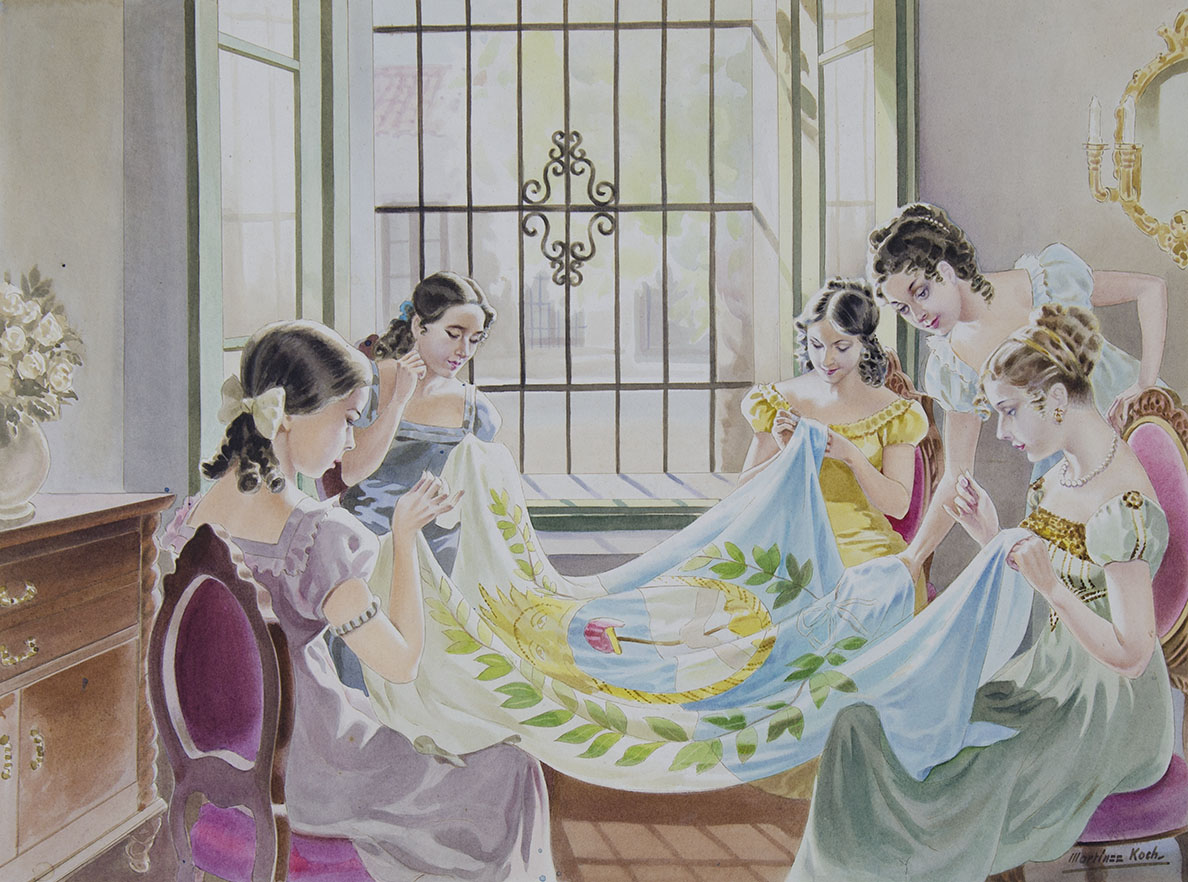 THE FIRST INDEPENDENT FLAG OF AMERICA

Watercolor on paper, signed. Measurements: 31 x 41.5 cm / 12.2 x 16.33 in. Copy in good condition, with indications for its edition, mounted on a rigid cardboard. It is displayed framed.

The present work, of a historical nature, should have been made to integrate an educational book. It refers to the patricians from Mendoza who embroidered the Flag of Los Andes. As Governor Intendant of the Cuyo region, General San Martín organized an army there to confront Spanish power. Then the need arose for a flag that would give it identity. At the end of 1816, in a meeting in the house of the Corvalán Sotomayor family in which the Governor Intendant participated with his wife, the idea of ​​making the Flag of the Andes was born. (1)

The watercolor presented here, with the evocative clarity of the illustrations of the training books of yesteryear, and in turn with undeniable artistic quality, represents Remedios de Escalada de San Martín observing the flag embroidered by Dolores Prats de Huisi, Margarita Corvalán de Anchorena, Mercedes Álvarez de Segura and Laureana Ferrari de Olazábal. A letter from the latter, dated 1856, is the origin of this legend, questioned by recent historiography. In the watercolor they are inside a home with characteristic colonial architecture, sitting in front of a bright open window with forged bars, lighting up there during the hot Mendoza summer.

Santos Martinez Koch illustrated books for Editorial Sigmar, such as El Martín Fierro, The Thousand and One Nights, Universal Legends, Jules Verne novels and short stories by Jans Christian Andersen, as well as reading learning books. He also did it for Editorial Kapelusz; made the illustrations for Juvenilia by Miguel Cané, Chico Carlo by Juana de Ibarbourou, and Robinson Crusoe, all three in 1965. Emancipation issues occupy a place of preference in his long career as an illustrator, in which the cover for Ruta Gloriosa by Arturo Capdevila and García Velloso stands out. This watercolor -included in said theme- is reproduced in the catalog El Cruce de los Andes, San Juan, Franklin Rawson Provincial Museum of Fine Arts, 2017, p. 99, dated 1950, the year of the commemoration of San Martín.

1. On January 5, 1817, the blessing and swearing of the flag of the Army of the Andes and the proclamation of the Virgen del Carmen as Patroness and Generala of the Army took place in the Mother Church.

Fabián Agostini: Mendoza honors its flag. By the Director of the Los Andes Army Memorial, dependent on the Ministry of Culture of the Province of Mendoza. On the Internet: https://ilustracion.fadu.uba.ar/2016/09/15/__trashed/