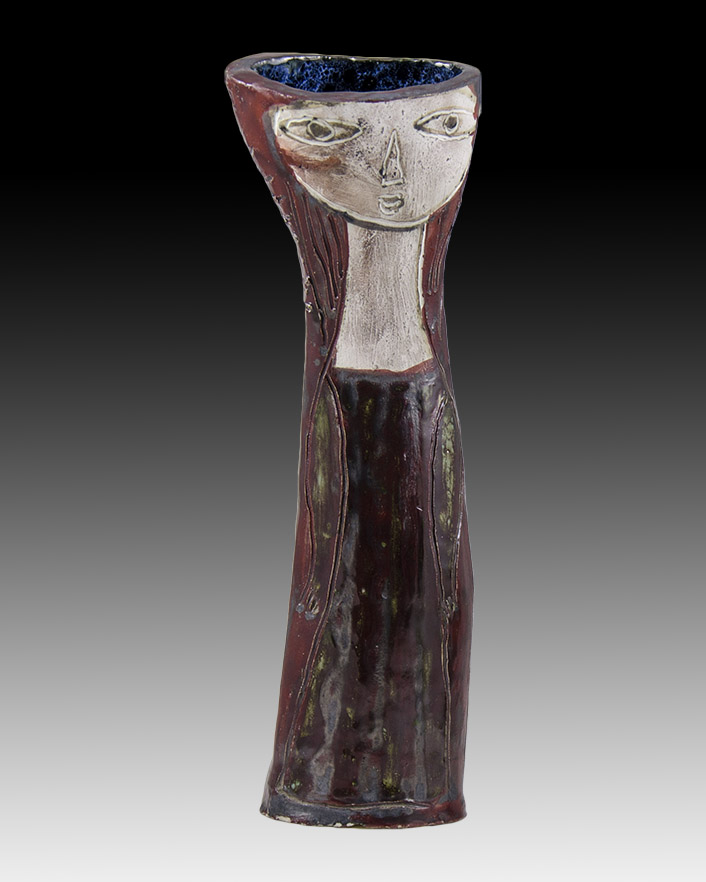 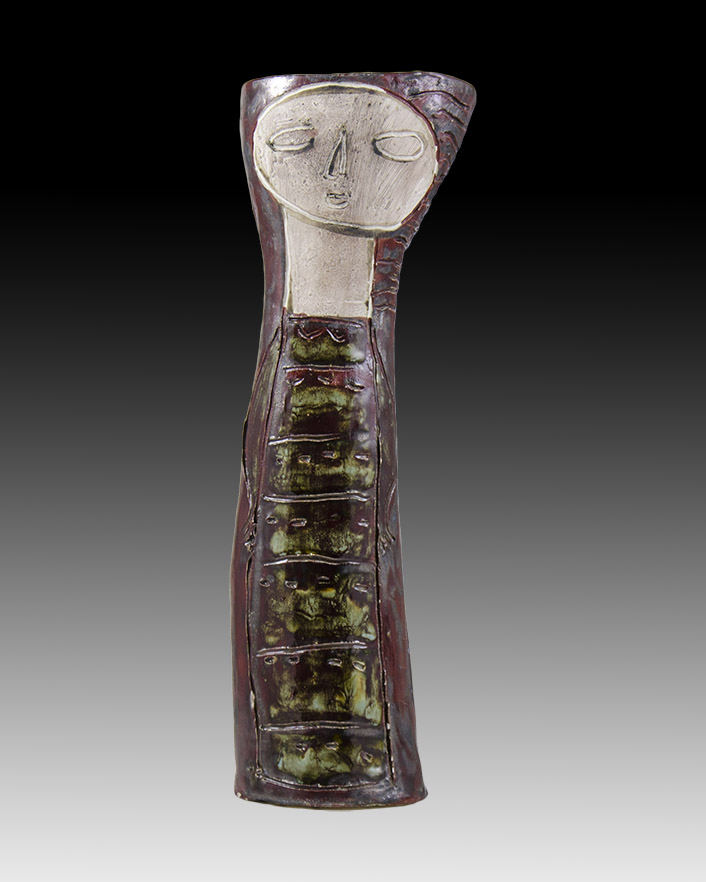 Ceramic jug with an interesting irregular shape, a cylinder slightly inclined to one side and wider in its mouth, a profile that matches two human figures engraved on both sides. The synthetic face that both characters have is the iconic image of this artist, we find it throughout his career both in ceramics, as in wood sculptures, or paintings. We observe the same economy in the bodies, in a kind of dresses that accompany the shape of the jug, and arms on each side. The work is enameled in coppery and green tones except for the head, which is lighter, and a beautiful blue inside. In the extensive study carried out by Vilma Villaverde (1) we observed a similar piece entitled Cacharro con figura from 1954.

Leo Tavella (1920, Gálvez, Santa Fe province - Buenos Aires, 2015) was a painter, sculptor and ceramicist. In 1936 he entered the Municipal School of Fine Arts of Córdoba. Two years later he began in sculpture attending classes with Professor Miguel Pablo Borguello. In 1940 he began to teach drawing at the State Terminal School. From 1954 he began to carry out individual exhibitions, an activity that would be difficult to enumerate, since it spans five decades and the entire planet. Let us mention that he was invited to participate in the World Crafts Council, Austria; of the Latin American Ceramists Meeting, Puerto Rico and the Barro Meeting in America, Venezuela. In 2001 he participated in the Ichon International Ceramic Biennial (South Korea) and from that year on, his work is known in China, Japan and Korea. His teaching work is also vast. From 1950 until his death she taught ceramics and sculpture in his workshop. He was a Full Professor at the School of Ceramic Art at the National University of Misiones (1976-85), taught courses in Buenos Aires, Córdoba, San Juan, Brazil, Colombia and Venezuela, was one of the founders of the Center for Ceramic Art and was Jury in national and international competitions. He received numerous awards, among them, 1st Acquisition Prize in the III Hall of the Municipality of the City of Buenos Aires (1960); 1st Prize of the National Endowment for the Arts in the VII Salon (1964); 1st Prize from the same institution for the Sculpture section in the XI Salon (1968); Acquisition Award of the Subsecretariat of Culture of the Nation in the XV Salon (1972). He was the first to receive the Presidency of the Nation Acquisition Grand Prize when the National Ceramic Hall was established in 1976. These awards are added to many others harvested in his long career, such as the Konex Platinum Award in his discipline (1982).