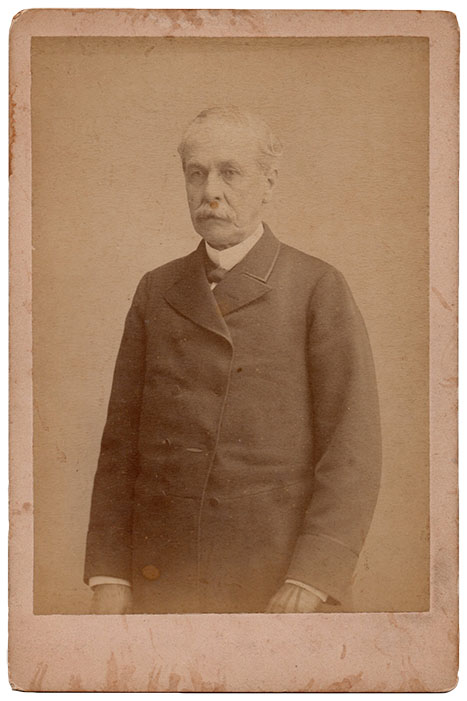 From 1870 on, the English format known as portrait cabinet was imposed on photographic studios, which gradually displaced the carte-de-visite. On this occasion, the famous public man decided to take his portrait posing in an unidentified atelier in what is known as a three-quarter-length portrait. He did it with his palletó, wearing goat gloves.

Francisco Bernabé Madero (Buenos Aires: 1816 - 1896) was a prominent military man, politician and businessman. Opponent of Rosas, he supported the deed of Lavalle and after his defeat, he had to go into exile in Montevideo, where he served in the fight against the siege of Oribe. After the Battle of Caseros, he returned to Buenos Aires where he developed an outstanding political and business activity, was a deputy, senator, president of the provincial Mortgage Bank, the Western Railway and the Argentine Rural Society. Finally he held the Vice Presidency in the first Government of Julio Argentino Roca (1880-1886). Among so many merits we must highlight the founding of the city of Maipú in the province of Buenos Aires, very close to his stay, which was considered in its time a model for the improvement of bovine and equine breeds.