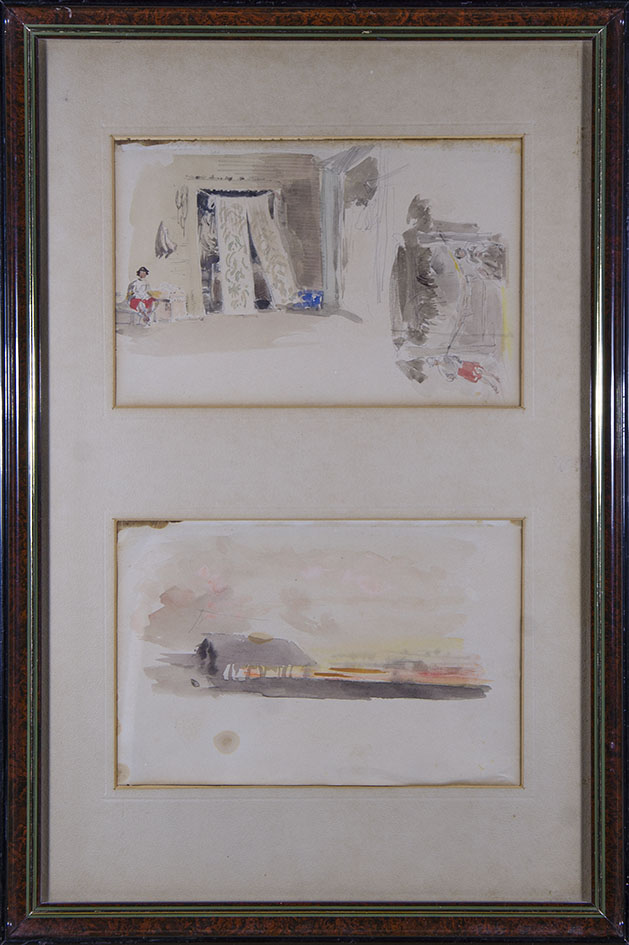 Paradigm of the traveling artist of the nineteenth century, Pallière was a master in the art of sketch or note, various names that bear the works that the painter and draftsman was making with watercolors or pencils on the sheets of a notebook at the precise moment that I observed them, to later develop them in major oil paintings, in the tranquility of the atelier. However, these approaches have their value in themselves. We offer here three of his "traveler's visions" made on two sheets.

In the upper one we observe two scenes from the interior of a ranch. To the left, in a spacious, high-ceilinged room, a man in a white shirt and red chiripá sits next to a door. Some curtains drawn by a cord and swayed to the rhythm of the Pampean wind separate it from another environment. In the scene on the right, the same character, this time wearing a hat and headscarf, leans on the pitchfork at the door of his ranch. At the other end, his china is sitting. Between them, attached to the door posts, hangs a hammock. The set is completed with a third view -the bottom one in the frame, and the most precious of the three- that with even more light strokes, outlines the ranch from afar on the Pampean horizon, against the light of a sunset lit in colors. We ponder them, not only the beauty of three small masterpieces, but also the precise visual record of that time and that place, which, like a visual chronicler, Pallière collected in his wanderings through the Argentine lands in the second half of the 19th century.

Its author, Juan León Pallière (1823 - 1887) was one of the most prestigious artists who, in the second half of the 19th century, left us with beautiful views and scenes with Creole, natives and European settlers and their customs. Born in Brazil, Pallière made his academic journey through Europe and in 1855 he settled in Argentina where he performed for ten years, becoming the most outstanding artist of the time. In his various excursions around Buenos Aires and more distant places such as Córdoba, Santiago del Estero and Tucumán; Chile, Cobija (then a Bolivian port) and Salta; Uruguay, or Entre Ríos, the Chaco, Misiones and southern Brazil, he raised his sketches and notes in field notebooks, which already in his study were essential for making oils, watercolors and inks. In 1864 he reached the zenith of his Rio de la Plata artistic production when he published his extraordinary Album of American Scenes, composed of 52 plates lithographed in Buenos Aires by Pelvilain. Two years later he returned to France to settle permanently in that country.