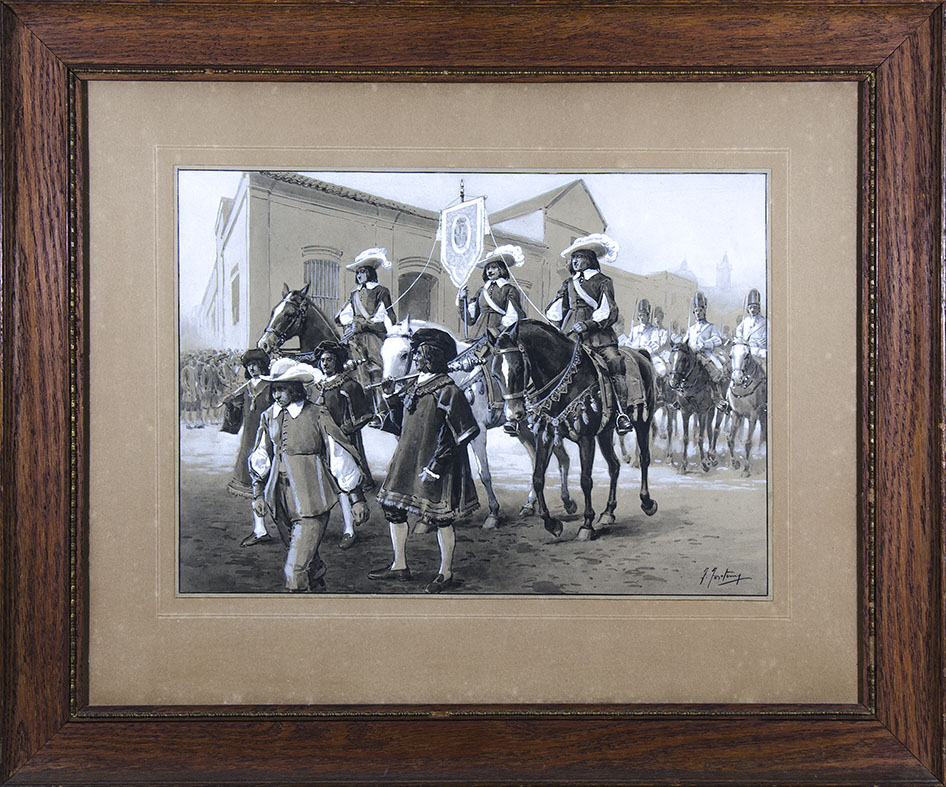 The scene represents the ride of the Royal Banner symbol and representation of the monarch- during the festivals in Buenos Aires celebrating the proclamation of King Carlos III. In the center, the Royal Ensign riding, as Mallol describes, a magnificent horse, harnessed with silk bridle, cover, tassel apron, brocato hat; all embroidered with gold and silver trimmings. Bizarrely he carried the Banner, of which the two mayors had tassels at his side; another squad of Dragons was closing the procession". (1)

BJ Mallol published in Plus Ultra magazine a series of articles under the title Colonial Narratives, later compiled in the 1919 book. The work we offer here illustrated the text published in Plus Ultra, number 24. For the purpose of emotion with the graphic vision of things -as Rómulo Carbia defined- nothing better than the scenes drawn with descriptive precision by Francisco Fortuny from Tarragona (he arrived in Buenos Aires in 1887), a regular contributor to magazines and illustrated magazines. In addition to his work in Caras y Caretas whose monthly magazine was Plus Ultra since 1916- the illustrated ephemeris that he published in La vida moderna, later compiled in the Argentine Historical Album, and the manuals of Editorial Estrada stand out. He was also a skilled painter trained at the San Fernando Academy of Fine Arts.

1. J. B. Mallol: Colonial Narratives. Banners for the king. Illustrated by F. Fortuny. In "Plus Ultra" magazine. The text bears the reproduction of the original that we offer here.