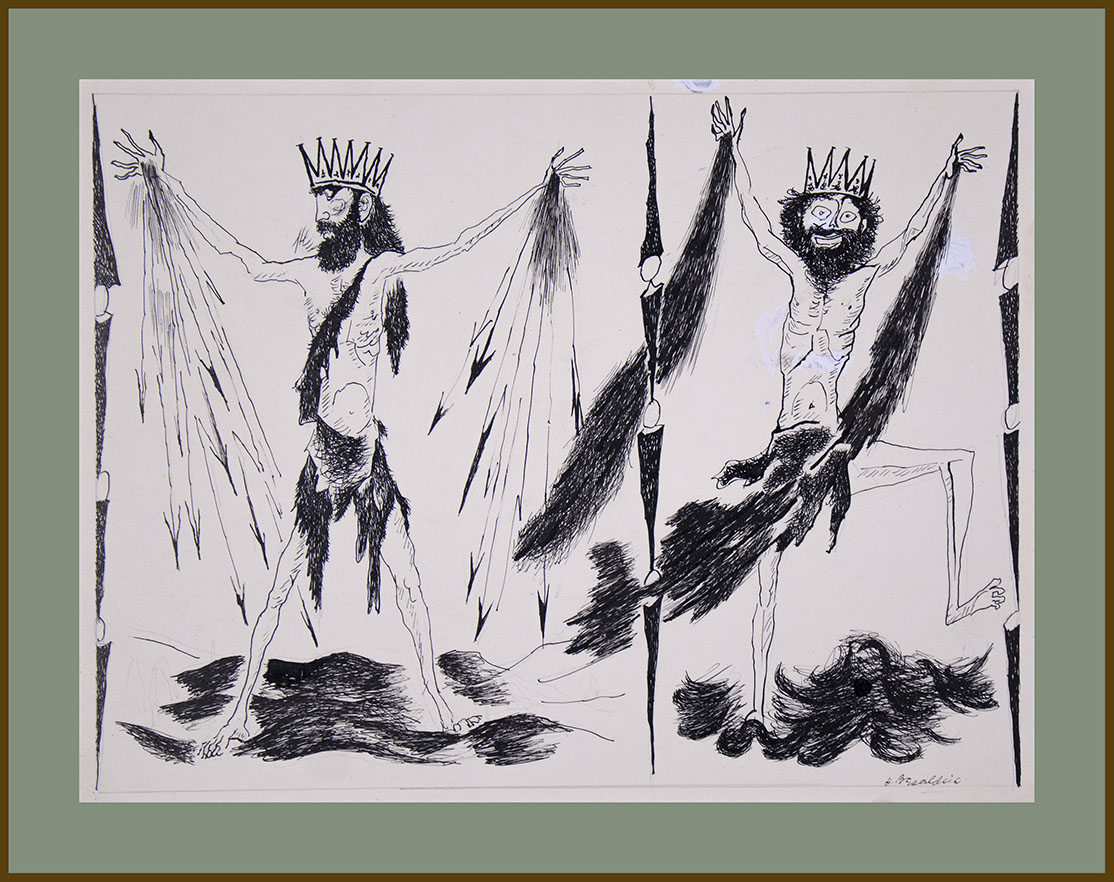 Well, as I say, I am Thundering Jupiter. Buenos Aires.

Ink on paper, signed on the front H. Basaldúa and on the back Part II Chap. I Well, as I say, I am Thundering Jupiter And I am Neptune and Héctor Basaldua, Uruguay 1262 42-1637. Measurements: 23 x 30 cm. Former Alfredo González Garaño collection.

The work refers to a scene from the first chapter of the second part of the Ingenious Knight Don Quixote de la Mancha, originally published in 1615, ten years after the first part. We read there: "Don't you know, little graduate, that I will be able to do it, because, as I say, I am Thundering Jupiter, that I have in my hands the scorching rays with which I can and usually threaten and destroy the world?" and I, who am Neptune, the father and the god of the waters, will rain as many times as I feel like it and it is necessary. Indeed, we observe in this ink the characters of this moment in the famous Spanish novel. Two madmen, in their cages, half-naked and covered in rags. From the first emerge the rays, it is Jupiter; on the other, the waters, is Neptune. We have not yet been able to identify whether it is the illustration of an edition of the Spanish classic (1), or the costumes for a theatrical performance. Both possibilities are feasible.

Héctor Basaldúa (Pergamino, Buenos Aires, 1895 - Buenos Aires, 1976) was an Argentine painter, engraver, lithographer and set designer. He studied with the Italian painter Augusto Bolognini and at the National Academy of Fine Arts. He perfected himself in Paris, where he entered the Modern Academy studying with Charles-François Guérin. There, together with compatriots Antonio Berni, Lino Enea Spilimbergo, Raquel Forner and Aquiles Badi, among others, they formed the so-called Paris Group. With Badí he participates in the Hall of Independents in Paris. Around 1930 he returned to Argentina and illustrated Los Consejos del Viejo Vizcacha, on the character of Martín Fierro, at the same time that he was appointed Director of the Teatro Colón, beginning a prolific career in the performing arts.

1. Basaldúa participated in the contest organized by Emecé in 1957 to illustrate the second part of Don Quixote. They did it among others, Batlle Planas, Norah Borges, Castagnino, Russo, and Carlos Alonso. As all the personal data appears, it may be a drawing by Basaldúa for this contest.