THE DREAMS OF LEONORA. ARGENTINEAN ARTISTS AT THE VENICE BIENNIAL. 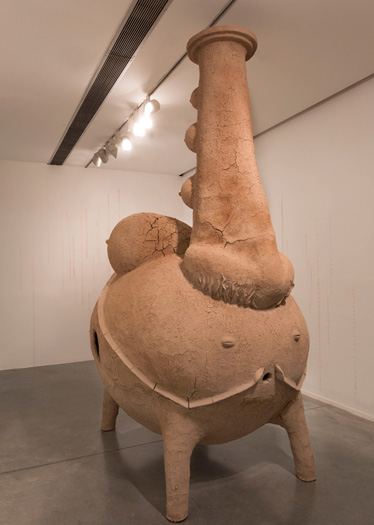 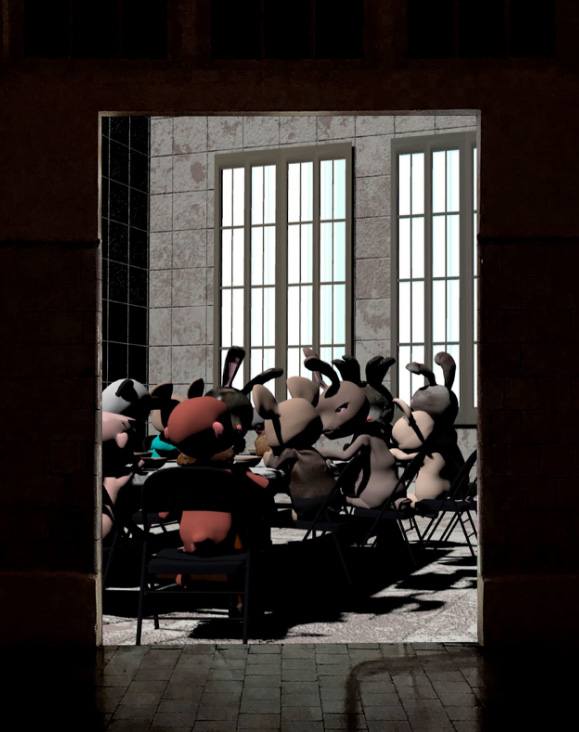 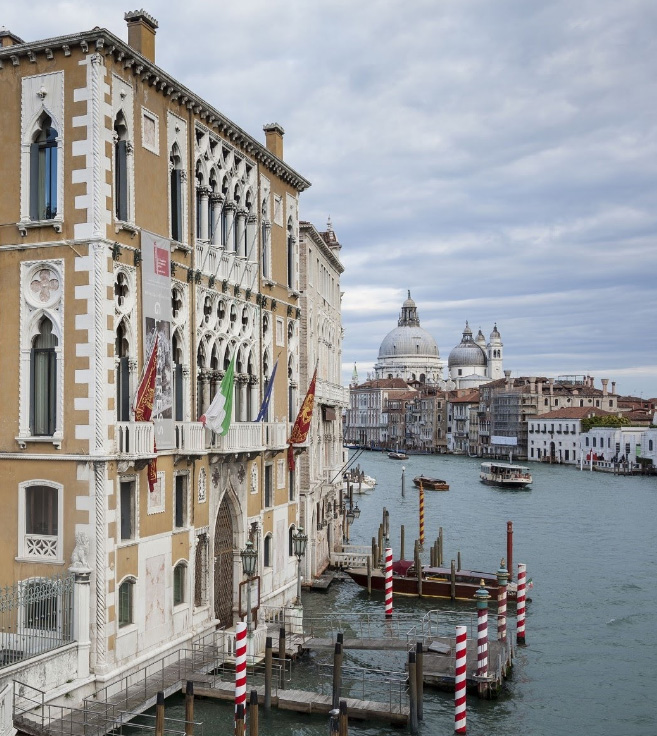 In her fantasy, Leonora Carrington imagined a universe in which the wonder lay not in the fiction of her creatures but in the possibility of their coexistence. The milk of dreams is a manifesto that hides behind children's stories to evoke the vision of a world ready to be lived from a committed imagination. The 2022 edition of the Venice Biennale, titled the same as Carrington's illusion, recovers that fluid instance between the artist's vision and current society to think about the fragility of the stable and open one's eyes to worlds that are less and less strange. Without evoking it directly, the pandemic levitates over the plot line to discard apocalyptic notions or allusions to the "post". It is not about thinking about the end of the eras or the limits of time, but about the elasticity of its edges, about the need for change and permanent transformation. Mutatis Mutandis.

Thus, thematically articulated according to the representation of bodies and their metamorphosis, the relationship between individuals and technologies, and the intertwining between bodies and the Earth, the exhibition proposes a sharp reflection on the omnipresence of the hybrid in a present that renounces the expulsion of the different And the gesture is replicated in a historiographical approach in which the linear chronology is replaced by a transversal gaze that activates relationships and affiliations from historical leaps that allow new readings, different strata in the traditionally assigned meanings: there will not be a sequential script but "capsules of time, five thematic exhibitions organized from this search for alternative connectivity.

This 59th version of the Biennale, which will open on April 23 and remain open until November 27, is curated by Cecilia Alemani for the exhibition in the Central Pavilion, the Giardini and the Arsenale. Argentina will have a significant presence here since Alemani, the first Italian woman to assume the role, summoned Gabriel Chaile to be part of the main exhibition. An artist from Tucuman, his work allows the confluence between the mystical and the mundane, the sacred and the political from a perspective that is nourished by a particular anthropology not exempt from humor and irony. Its clay ovens, functional but diffuse, appeal to memory as a chain of epochal transmission from an active place that invites you to participate in what is made there without that "relational" experience annulling its magical edge: the ovens are also figures, unclassifiable species that connect with the spiritual but that are manifested in the materiality chosen by the artist, artisanal and painstaking, that brings to life the land from which it emerges and resignifies it.

On the other hand, the Argentine pavilion, one of the eighty national pavilions that make up the exhibition, will feature the work of Mónica Heller and the curatorship of Alejo Ponce de León. The shipment consists of a multi-channel 3D animation video installation in which different artificial sounds accompany characters in permanent transformation in a fantastic climate. With a strong use of the metaphorical resource that takes up the idea of ​​metamorphosis, Heller also recovers that dimension in which change is necessary. And in that sense it links with the discourses of science, myths, religion and the arts, which have always addressed the issue of the threat to the human, its ability to adapt and resilience, themes of great relevance in a historical moment. where survival is at stake.

From their different rhetoric, Gabriel Chaile and Mónica Heller inaugurate a symbolic dimension that connects their own imaginaries with reality, not to describe it but to discover it, analyze it critically and live it sensibly, building possible alternatives that are not based on inherited certainties, but on the cadence sign of infinite change and the imaginative seriousness of the universe of uncertainty that often guides the artist's hands and knew how to fill Leonora's book with dreams.

Gabriel Chaile (1985, Tucuman). He studied a degree in Plastic Arts at the National University of that province. In 2009 he obtained a scholarship from the YPF Foundation that allowed him to participate in the first artist program at the Torcuato Di Tella University. He has made numerous collective and individual exhibitions, in his province, in Buenos Aires, La Rioja, Santa Fe and Germany, among which stand out This song has already had applause (Chert Ludde, Berlin 2019), Genealogy of the form curated by Andrea Fernández (Barro, Buenos Aires, 2019), Diego, curated by Cecilia Alemani (Art Basel Cities, Buenos Aires, 2018), Things that the eye did not see (Museum of Contemporary Art of La Boca, Buenos Aires, 2018), Sonia (El undulatorio, La Rioja, 2018), Proto, a film by Gabriel Chaile (Ruby Gallery, Buenos Aires, 2017), Patricia, curated by Laura Hackel (Museum of Modern Art of Buenos Aires, Buenos Aires, 2017), My name is legion because we are many (San Pablo T Cultural Center, Tucumán, 2016), It is not my fault if it comes from the river (Recoleta Cultural Center, Buenos Aires, 2015), Getting out of the furrow when tilling the land, delusions of grandeur II (National Fund of the Arts, Buenos Aires, 2014). Chaile has participated in art fairs such as Art Basel (Basel), The Armory Show (New York), arteBA (Buenos Aires), Art Basel Miami Beach (Miami). He has held group shows in Tucumán, Lima, Montevideo, Paris, Cuenca and Buenos Aires and in 2019 he participated in the Bienal de Arte Joven (CCRecoleta, Buenos Aires, 2019), in BienalSur curated by Leandro Martinez Depetris (EAC, Montevideo, 2019) and The last supper at the Faena Festival (Miami Beach). In his short career he received important distinctions, such as the Production Scholarship from the National Endowment for the Arts, 2014-2015; the Mention in the Klemm Prize and the Braque Muntref Prize, both in 2015; the Oxenford Travel Scholarship, and the first Itaú Cultural Prize in 2010. He lives and works in Buenos Aires.

Mónica Heller (1975, Buenos Aires), like Chaile, has participated in the first edition of the Torcuato Di Tella University Artists Program (2009), created by Inés Katzenstein. She was awarded a scholarship by the MMSN foundation to carry out a residency at the Hangar Center for Contemporary Creation, Barcelona (2010). She has been awarded by the National Fund for the Arts 50 years Hall 2009, Itaú Cultural Prize 2010, MUNT Hall of contemporary art Tucumán 2017, Andreani Foundation First Prize 2017 and Encouragement Prize at the 72 National Hall of Rosario among others. In 2019 she presents From satellite consciousness to satellite knowledge. A work commissioned by the Braque Prize, El Gato Sangrante y el Corazón Barbudo at PIEDRAS gallery and Fundación Proa (Buenos Aires, Argentina) and OK.012/019 at LISTE  Art Fair Basel and art berlin. Her works were exhibited individually and collectively in Buenos Aires, Rosario, Salta, San Martín de los Andes, Tucumán, Barcelona, ​​Santiago de Chile, London, Lyon, São Paulo and Berlin, among others. Since 2012, together with Marcelo Galindo, he has been making the animation series Ciudad Elemental thanks to the support of Plataforma Futuro, of the National Ministry of Culture, which was presented in the Malba auditorium in April 2018 and in Mundo Dios, Mar del Plata.