AN EXCEPTIONAL PHOTO COLLECTION, RAUCH AT THE EARLY TWENTIETH CENTURY. 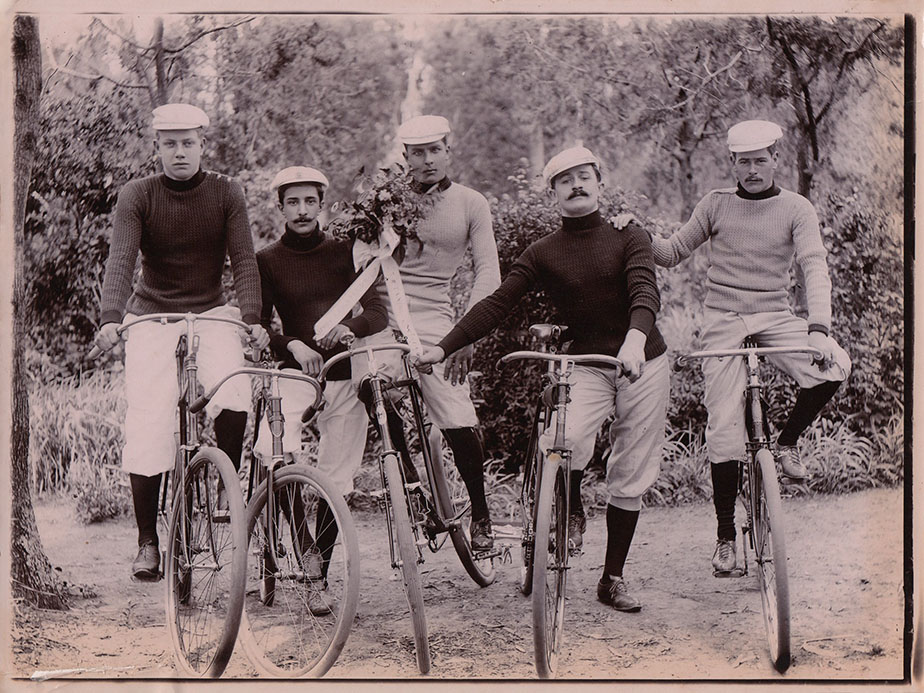 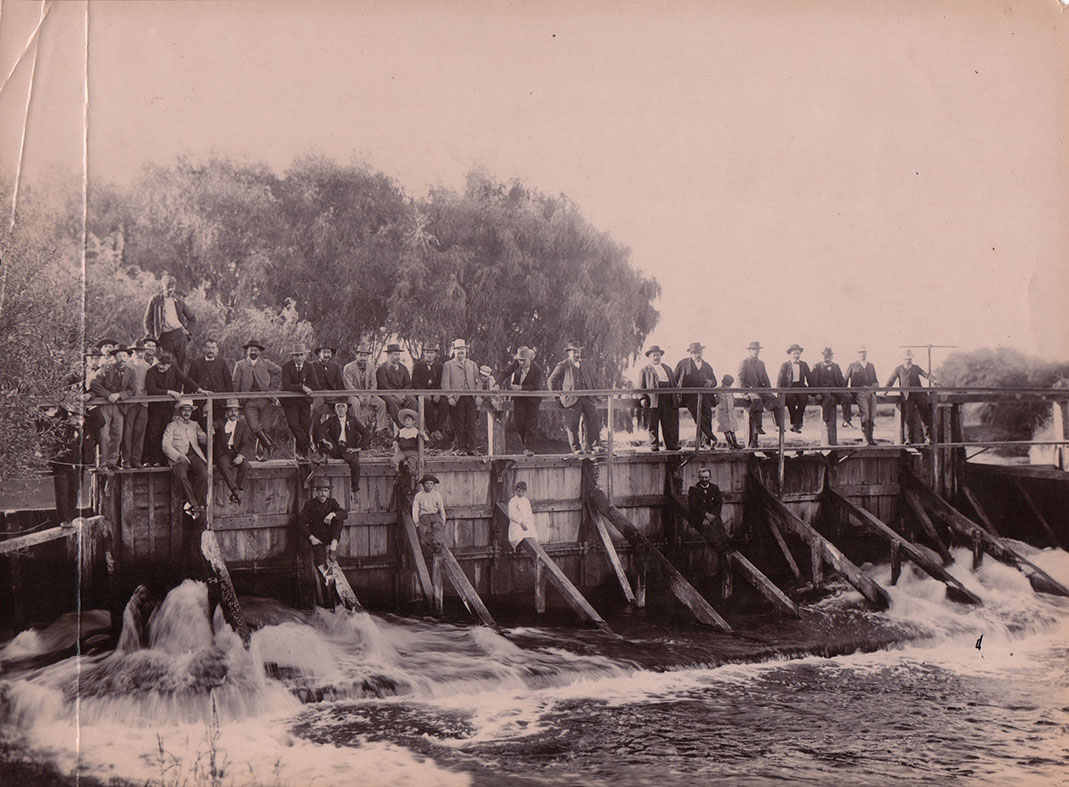 He is the co-author of numerous books, essays, catalogs, and articles on Argentine historical photography. In 2021 he presented his first title of exclusive authorship: These papers are stronger than bricks (ArtexArte Editorial. Imperfect Pretéritos Collection. Buenos Aires). For decades he has worked as a journalist specializing in old photography for the Buenos Aires newspaper Clarín.

He is a 5th generation descendant of the German daguerreotypeist and photographer Adolfo Alexander (1822-1881).

He curates numerous exhibitions on daguerreotypes and old photographs nationwide. He has directed various Photographic Museums and Historical Photo Libraries. In 1985 he was a founding member of the "Dr. Julio F. Riobó" Research Center on Ancient Photography in Argentina.

Around 1992, together with Miguel Ángel Cuarterolo and Juan Gómez, he started the renowned Congresses on the History of Photography of national and international significance through 12 meetings.

He currently chairs the Ibero-American Society for the History of Photography (SIHF).

For 15 years, together with Juan Travnik, he organized exhibitions on national historical photography at the PhotoGallery of the San Martín Theater, in the City of Buenos Aires.

From 2006 to 2018 he served as historical-photographic advisor to the "Benito Panunzi" Photo Library of the "Mariano Moreno" National Library in Buenos Aires.

He has edited various photographic collections such as "Photography in Argentine History", "Scenes of Everyday Life", "A Century of Argentine Photography" and other titles on this historical theme.

In September 2017 he participated as co-author and guest speaker of the exhibition "Photography in Argentina (1850-2010). Continuity and Contradiction" organized by the J. Paul Getty Museum in Malibu, California.

We have recently coined the word "photologist" to designate, in some way, those responsible for a new specialty in the field of heritage photography, that is, that researcher who eagerly searches for hidden treasures in a multitude of public, private - collector archives or family-, and institutional; in antique shops, auction houses, flea fairs and even among urban recyclers, better known in popular jargon as "cartoneros".

In each and every one of them there is the same obsessive fever for the "great discovery" that is, suddenly finding that old photographic work that, due to its unique or special characteristic, stands out above all the others. We want to warn at this exact point that "photologists" differ in nothing from archaeologists, anthropologists, Egyptologists and many other specialists linked to logos, knowledge in Greek, of our past.

That was the exact sensation that the corpus of photographs that the Hilario firm brought me to carry out an exhaustive study of each one aroused in me; It was the selection prepared to present at the BAphoto 2021 fair, which is part of the eighth printed photographic catalog that will be launched in that space.

And as I went through these images, one set in particular caught my attention: 22 silver gelatins in the 18 x 24 cm format; all single or individual vintage works, sepia-tacked and with black margins. The copies were made by contacting glass negatives of industrial manufacture and known as "dry plates".

The evolution of photography and large urban centers

The most developed cities in the world were, from the very beginnings of photography, appropriate cities and conveners for the advancement and experimentation of this new art; This was due, among other reasons, to the fact that both Paris, London, Berlin and New York initially concentrated hundreds of photographers, both professionals and amateurs. Obviously, among the former, the competition was more than fierce and, in this sense, each atelier made an effort to raise the quality of their photographic works, a task that can be classified into two main fields: social portraiture and taking urban views. or rural, the latter in a much smaller proportion compared to the former.

This is what happened in Buenos Aires, a city that since 1843 saw the first daguerreotypes disembark and that from that date had the privilege of having more photographers in its small territory than in the rest of the country. For this reason, early views of the daguerreotype, "plein air" records, which multiplied through new techniques such as wet collodion negatives and albumen prints, have been known since the 1850s, to lead towards the end of the 19th century with the papers. to silver gelatin.

Single copies and bound albums with the so-called urban and rural views began progressively from the 1860s with the works of Esteban Gonnet, Benito Panunzi, Christiano Junior, Samuel and Arturo Boote, Samuel Rimathé and Harry Grant Olds. In this way the opulent Buenos Aires represented itself through its own gringo photographers, and the iconographic production multiplied in quantity, at the same time that it gained in quality.

That is why having in our hands a collection of views on the small Buenos Aires town of Rauch made at the beginning of the 20th century, was already an unusual event and, if to that surprise, we add the surprising quality of these 22 records, our admiration rose point.

Who was this camera artist? Rauch's historian, Dr. Hernani Justo Barili, informs us about the existence of a minimum number of professionals working in that town to date, they are Ramón Micó, Jacinto Sersósimo and the professor of painting and photography León F. Ibos, at to whom we finally attribute these wonderful works. In other words, Rauchenses had only three photographers at the beginning of 1900 when, 277 kilometers away, Buenos Aires had the sum of more than 75 photographic signatures, according to Pablo Basch's National Guide from 1903. What a difference!

The set presents us with a complete overview of that small agricultural and livestock community that, to date, only had around 12,000 residents. Our photojournalist set out to document the salient aspects of Rauch, and he did so by working with a bulky wooden camera for glass negative plates and in the respectable 18 x 24 cm size. Obviously he had to move the team with a horse carriage through the different locations to be searched, both in the town and in the field.

Starting with Rauch, we verify that he documents some local businesses such as pharmacies or stores; He does it with the intakes of its fronts or interiors, and also factories, the well-known flour mill. And in that decision to witness daily life, he captures social rites such as the impressive funeral procession, sports with their hunters and cyclists, the activity of foreign communities arising from immigration -we see the French and Spanish-, agricultural work through through a wonderful harvest scene with state-of-the-art steam equipment and of course, the endearing family records where children and young people are special protagonists.

Without a doubt we are before a sagacious observer who focuses his camera with great documentary criteria, and who at the same time does so with good artistic quality; He knows a lot about photography, he uses wide shots, normal and even steep, and of course the neighbors aware of this opportunity collaborate with the precise instructions from him, which indicates that he is a well-known person in the town.

One of the best records corresponds to a young group of cyclists with their equipment and race clothing, a sport and individual means of transport that, towards the beginning of the 20th century, was gaining great relevance and revolutionizing social customs. The five athletes pose proudly and happily in the garden of a villa showing their well-deserved trophy, which, at the time, was a simple bouquet of flowers.

In the vicinity of the urban layout, the Napaleofú stream has always been a place of recreation and expansion for the residents of Rauch; the construction and maintenance of a necessary dam to channel its waters was the excuse for our photographer to organize an extraordinary staging, whose protagonists are all men posing for the camera on that wooden and iron structure.

The harvest scenes are part of the best iconography on the Argentine countryside; the mechanization of agriculture positioned our country as "the breadbasket of the world" due to the incredible volume of cereal exports. We consider that this work scene in the so-called "Pampa Gringa" with its bosses, laborers and even families with children, is already part of this saga. The star is definitely the huge steam thresher or Locomovil, and the delicious detail is provided by the Creole "mechanic" with a hat and a cigar who lubricates the monster with his little oil can. 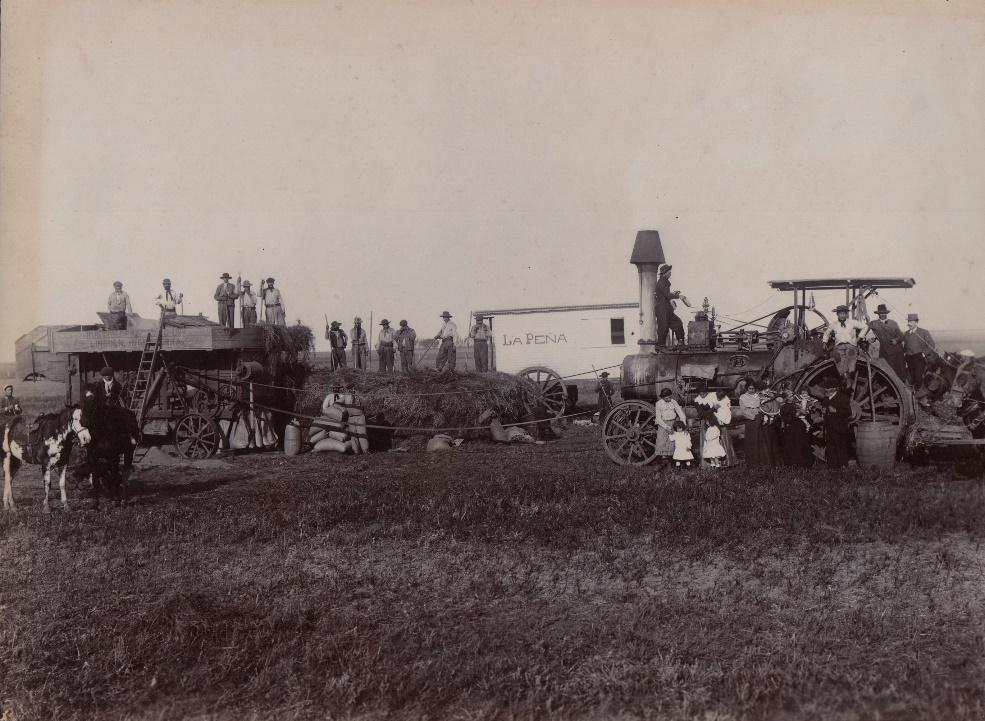 Bucolic scene on a summer afternoon, where four children play in grandfather's house; It is really a charming painting that provides interesting details about the customs of the time, such as the standard hats for boys, one of the first children's tricycles and the curious wooden carriage with a front axle for young children, a typical toy from the 19th century. which used to be shot by large dogs. The elaborate hammock is for the older girl with high ankle boots, while the shy younger girl wears her braids. The proud grandfather - he has lost his left hand - sits on the classic folding beer chair, while the companion dog hides behind the girl's legs and barks in front of the threatening camera with her tripod. 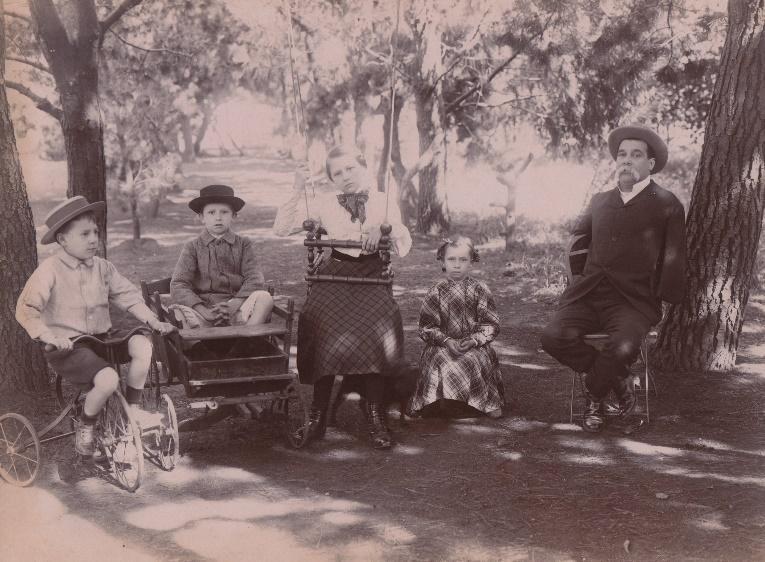 The last photograph that we describe about this valuable Buenos Aires collection is the most significant from the social point of view; the historian Barili informs us that at the beginning of the century there were in the town of Rauch a large number of "solemnly poor" children who depended on social aid to survive. The tremendous scene shows them gathered together observing three wheelbarrows with large chunks of meat - including the fleshless head of a beef - and a large bag of bread. Terrible scene of extreme poverty in that sunny noon and where child hunger is the absolute protagonist. 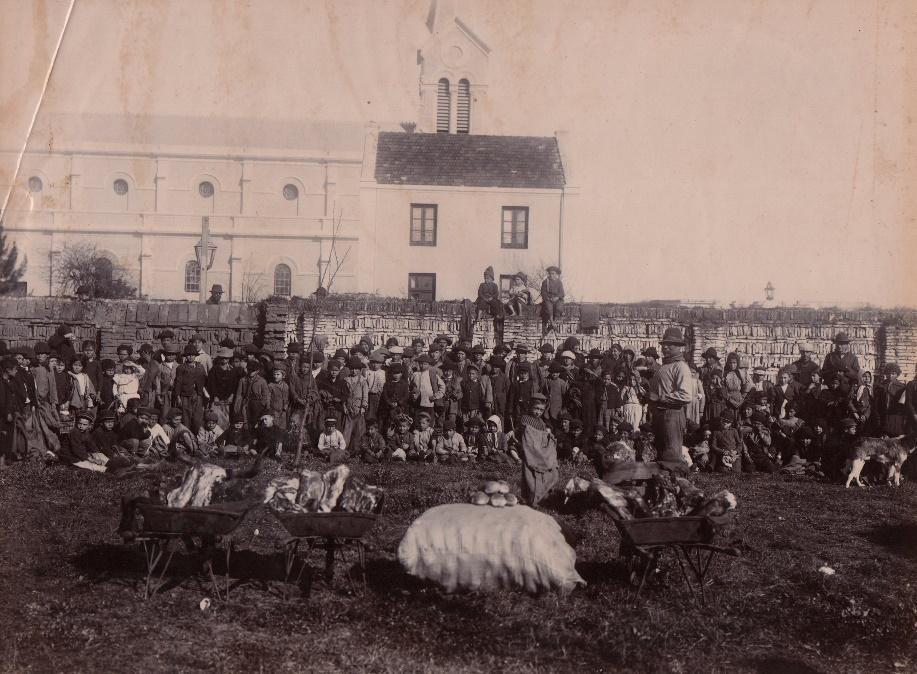 To conclude, we cannot fail to relate this exceptional photographic collection on the town of Rauch, with a similar work in concept carried out -but years later- by the famous photographer Fernando Paillet (1880-1967), who documented with great skill the city of Esperanza (Santa Fe) - where he was born - including the colonizing saga of those gringos who bet everything on their new homeland, Argentina.