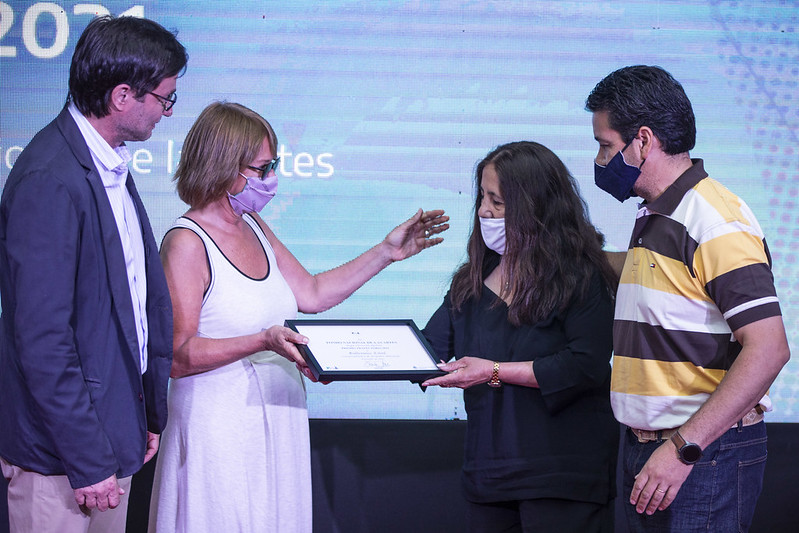 Guillermina Cabral, along with her son. She receives the 2021 Lifetime Achievement Award from the National Endowment for the Arts. 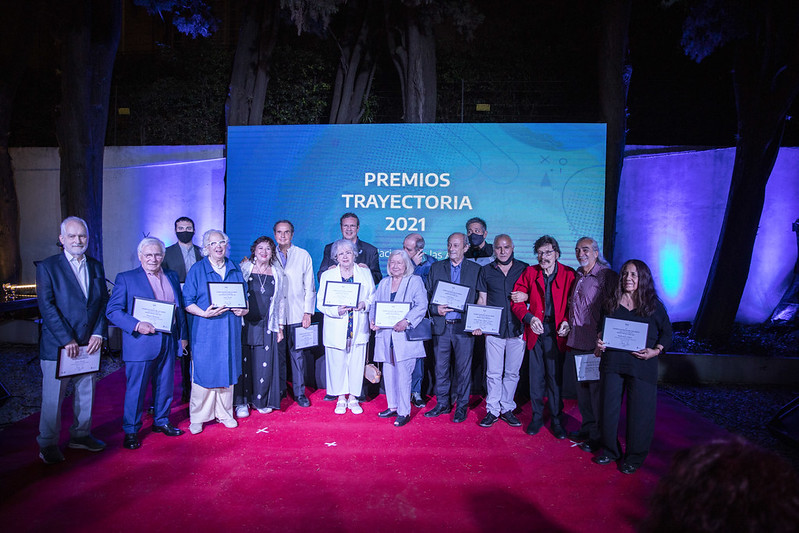 Together with the other winners, at the awards ceremony. National Endowment for the Arts. 2021.

In the center, a poncho knitted by Guillermina Cabral. It was part of the exhibition held at the National Senate Museum. 2018. 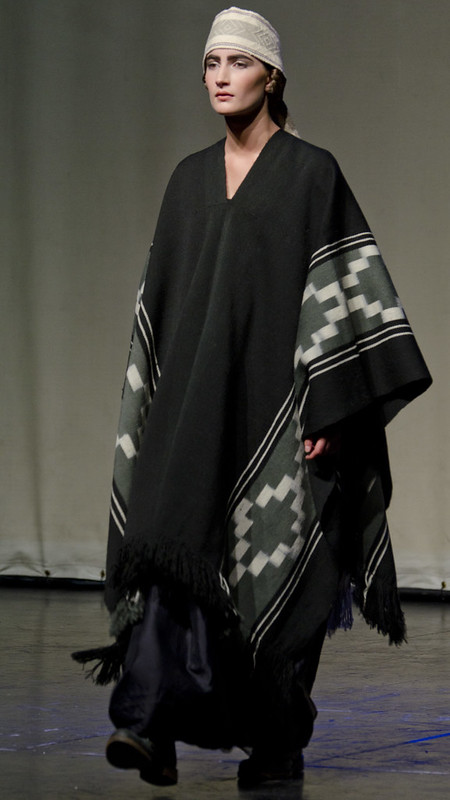 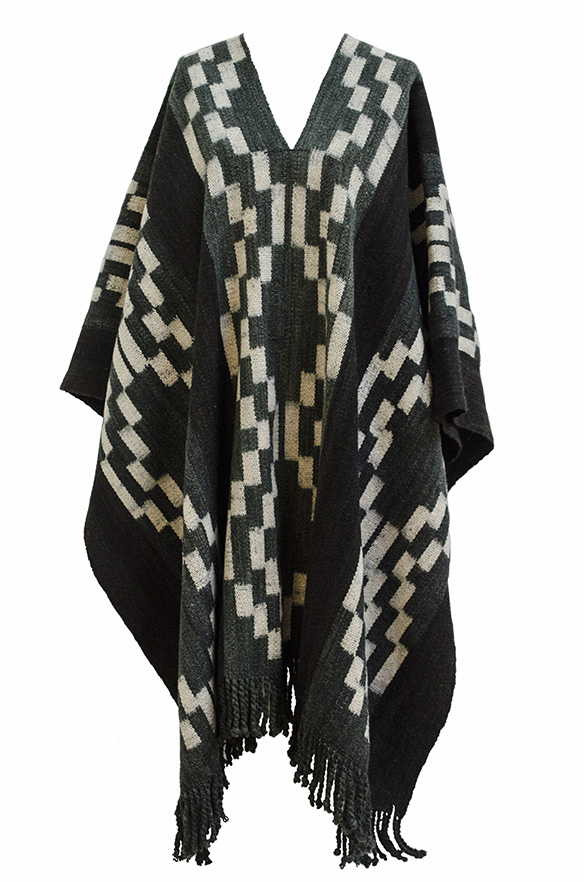 In the labor field, she is the Coordinator of the National Market of Traditional and Innovative Argentine Crafts, MATRIA, dependent on the Ministry of Culture of the Nation. In addition, she serves as the Vice President of the Latin American Board of the World Crafts Council and is a Member of the National Academy of Folklore.

At siesta time, a woman works bent over a loom. The horizontal structure that occupies almost the entire room has a warp stretched out with groups of threads tied end to end. The craftswoman crosses the thread of the weft, adjusts the criss-cross with a bone punch, brings the shovel hard towards her, and then stops. She looks at all that she has left unwoven and unties the nearby ties. The sequence is repeated for hours, until she feels cold, or hungry. The scene is crowned by the portrait of Veneranda Cabral, mother and teacher of the craftswoman. The face in the photograph has the same look as hers. But the eyes on the paper are not on the tied threads of the warp, but fixed on the memory of a lineage that includes Rosario Peralta, the weaver grandmother and other ancient women. The techniques of the list and the tied list, the elevated horizontal loom and the dyes from Monte Pampa make up a textile legacy of the Ranquel people. Guillermina Cabral belongs to a genealogy of artisans who maintained and revitalized this heritage.

The chronological sequence of those events preserved in the textile memory of the western Pampas begins with the arrival of Llanquetruz in the s. XVIII. One hundred and fifty years later, around 1879, the last military offensive took place that dismantled the indigenous resistance in the area. Then, the process of sedentarization and compulsive Christianization of the communities took place. The violent incorporation into modernization included the prohibition of the language, the suppression of indigenous names, the proscription of ceremonies and rituals, and the banishment of artisanal artistic practices.

In 1899, the Emilio Miter Colony was created, a foundation that brought together the native population that had survived the military campaigns and had been displaced, such as the Ranquel families from the surroundings of Luan Toro. In the same Colony, in its peri-urban areas and in the rural zone, the priority economic activity of the countrymen was agriculture and, fundamentally, the raising of sheep and temporary shearing in nearby establishments. These are the payments where Guillermina Cabral was born -in 1952-. As a child she was a criancera and as an adolescent, a spinner. Very young and in search of work, she moved from the family home in the countryside to an establishment near Victorica. Her life changed, but she continued spinning with the fleeces that her mother brought her, and weaving.

At the end of the 1970s, she began to operate the Mercado Artesanal de La Pampa, an institution that fostered the rich artisan tradition produced in rural areas. Meanwhile, the young Guillermina, at the end of her working day, continued to weave, because she liked it. Years later, the link between the Craft Market and the weaver took place, giving way to her public life as an artisan. In the 1990s, Héctor Lombera identified her, based on her knowledge, as a spinner, artisanal washer, and dyer with natural dyes. From then on, she participated in the activities of the National Market of Argentine Traditional Crafts (MATRA) as a teacher trainer on these issues. In 1998 she was selected to exhibit her work in the edition of the Feria del Sol; organized by the Association of Friends of the National Museum of Fine Arts with the collaboration of MATRA. Every year she chose a craft that she presented as a central activity at the Palais de Glace -CABA- and that edition was dedicated to the poncho.

In 2000 she presented a matron with attached list guards before the jury of the 30th Exhibition and Fair of Traditional Crafts of the Exhibition of Livestock, Agriculture and Industry of the Argentine Rural Society. The court awarded him the "Memories of the province" award, for the revitalization of artisanal techniques. Three years later, on the same stage, she received the Best Poncho award and the First Prize in Fabric for a tied list poncho.

Guillermina participated in 2011 in the First Latin American Weaving Meeting organized by the National Ministry of Social Development -in collaboration with MATRA- together with traditional weavers experts from Bolivia, Brazil, Chile, Colombia, Costa Rica, Ecuador, Guatemala, Haiti, El Salvador, Mexico, Nicaragua, Peru, Panama, Paraguay, Uruguay and Venezuela. In 2012, the National Institute of Industrial Technology -INTI- identified her for her expertise in the use of natural colorants.

The tied list is known in various latitudes as ikat, a term that derives from the Malay word mengikat - to tie, knot or roll up. This voice entered the global textile nomenclature at the beginning of the 20th century when European collectors became interested in this rich Southeast Asian textile industry. One hundred years later, in 2016, a project was born that brought together hundreds of artisan fabrics from around the world using the ikat technique. Its curators Edric Ong from Malaysia and the specialist in Kashmir handicrafts, Manjari Nirula from India, selected a poncho from Guillermina Cabral and one from Selva Díaz (London, Catamarca) to participate in the World Ikat Textiles exhibition. The exhibition opened at the Brunei Gallery of SOAS University of London, a higher education institution specializing in Asian, African, Near and Middle Eastern studies.

Despite the worth of the aforementioned actions, neither the weavers of the Pampas nor the elevated horizontal loom enjoyed the prestige and visibility they deserve until well into the last five years of our century. Although there are citations in some specialized literature of the region, the registration of the procedure was not part of the circulation of information and knowledge about southern textiles in the country, in principle centralized in the fabrics in the Mapuche vertical loom -huitral or witral-. monopolizing that descriptive account.

In 2018, the specialist and historian Celestina Stramigioli, dedicates a paragraph to the "elevated horizontal loom used by women of the Ranquel ethnic group" in a publication of the National Endowment for the Arts, mentioning the coexistence in the region of this instrument along with the "loom with two poles nailed to the ground, used to weave the pampas belt. (1) In the west of the Pampas, both looms and the witral or vertical loom are part of the traditional indigenous instrumentation of shovel weaving. That same year, a piece by Guillermina Cabral decorated with lists and a tied list -a fabric achieved with five hundred and sixty ties- was exhibited in the exhibition dedicated to the poncho of the Senate of the Nation, together with thirty-five garments selected from all over Argentina, and was reproduced in the catalog that accompanied said exhibition. (2)

The particular interest in the tied list ponchos typical of the Ranquel area as well as the Mapuche area has led to a problem that is related to the intangible heritage of the peoples. These highly appreciated models are currently used for commissions in other craft production centers outside the cultural area of ​​origin, towards the center and north of our country, where weaving was nurtured by Hispanic looms. It is a displacement or diffusion caused by the demand that impacts the use of some textile finishes, such as the use of llancas -reinforcement in the mouth of the poncho- or other instruments, the modified Creole looms -for these pieces they are made wider- in an effort to achieve fabrics from a single cloth. In other words, ponchos similar to those of the south are ordered in other regions where they are made on Hispanic-rooted looms with less production time, resulting cheaper, but without the immaterial burden of those created in their own culture and with their own technical resources.

Guillermina, a master craftswoman who transcends

In 2019, the Latin American edition of Vogue magazine published a visit to the weaver entitled Secrets of a pampa poncho. (3) And the following year, part of the history and trajectory of this remarkable teacher was included in the book resulting from the research on the universe of spinners and weavers of the western Pampas carried out by the psychologist and writer Ana Martín. (4)

As an institutional achievement, it is important to mention that that same year, the Ministry of Culture of the province of La Pampa incorporated the "loom weaving technique" in the "Inventory of Pampas cultural heritage". (5)

This award repaired, in some way, the insufficient knowledge about the sophisticated technique and instruments of our traditional weaving. Likewise, the institution recognized in Guillermina Cabral the protection of the knowledge of the weavers of the Ranquel area, fundamental for the current process of restoring the cultural energy carried out by these communities with the recovery of their sacred places, the recovery and dissemination of the language, the recognition of communities and the right to land, and the revitalization of indigenous art.

Her inclusion in the National Endowment for the Arts Lifetime Achievement Awards distinguishes a lifetime dedicated to the art of the land. As with many craftswomen, still anonymous, a childhood as a criancera and spinner molded the expert in spinning with local fleeces. The identification of dyes is part of the knowledge of nature that characterizes weaving before the 20th century. The technique of tied lists is transmitted from generation to generation as mathematics and design "by eye". Weaving a poncho is weaving the cultural skin of a people. The act of weaving and unweaving on the loom of the ancestors implies revitalizing a practice that survived the military and cultural conquest. Guillermina made an immense contribution to this history of cultural resistance when she ignored the false promise of modernity and insisted on continuing to weave like her mother, like her grandmother, every day of her life.

The salt pan illuminates the clearings in Victorica, Arbol Solo and La Pastoril; These coordinates are from the lands of Llanquetruz where apprentices of the teacher who today, at 69 years old, continue to teach live and weave.

5. Secretary of Culture of La Pampa (2020) Resolution No. 51/2020 Opinion No. 57 of the administrative management of Law No. 2083, carried out in 2020, entered the Pampean Cultural Heritage Inventory the "Loom weaving technique" under Registry No. 54.