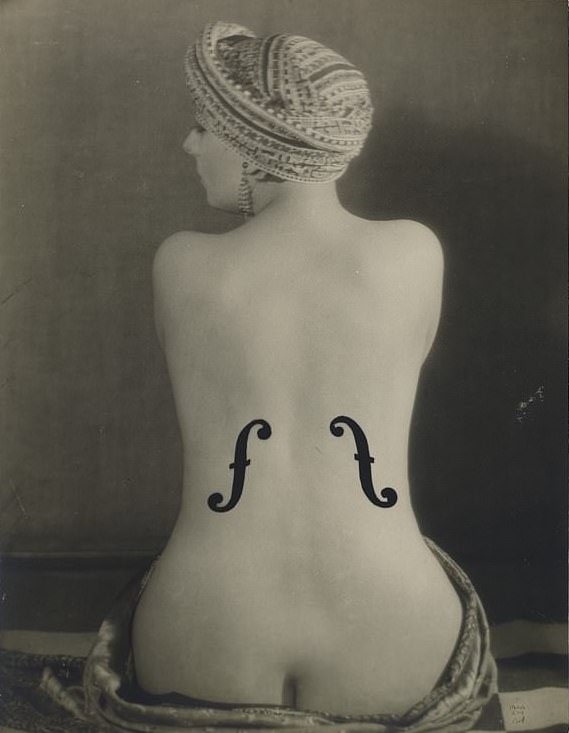 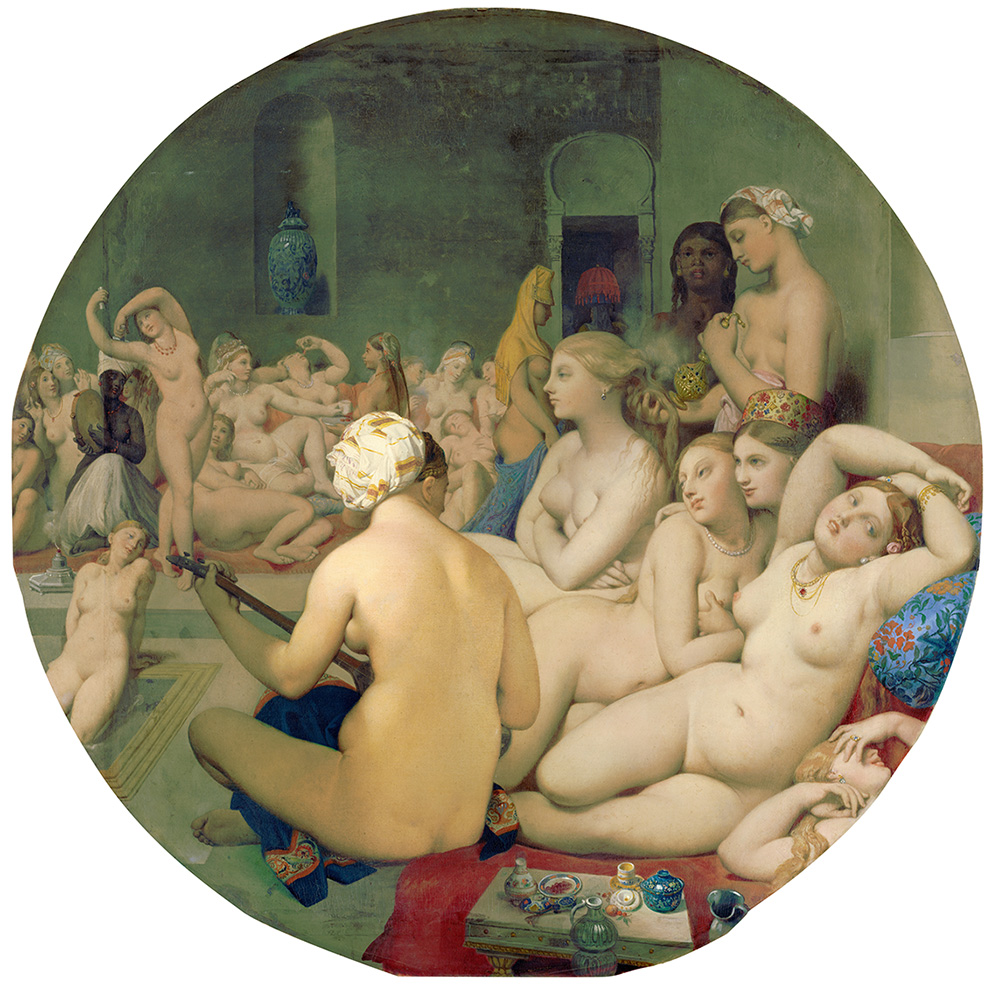 Ingres includes his bather in a new composition in Le bain turc (The Turkish Bath) of 1862, this time playing a mandolin.

Director of CONSULTART/dgb, a consultant with more than thirty years of experience in the local art market.

She has a degree in Advertising (USAL).

She was a Judicial Expert in Art, and Professor of "Art Market" at the Universities of El Salvador and the Argentine Social Museum.

She was a member of the founding group of the Tigre Art Museum, being in charge of acquiring the works of its permanent collection.

A painter artist, she has made her last individual exhibitions at the VYP, Arroyo and Librería Menéndez galleries.

Photography has shown new facets of reality from the discovery of the daguerreotype to the present day. Catching the fleeting transit of what was seen in orality, allowed the first drawing with light to appear around the middle of the 19th century: photography.

With this revolution the first photographers/inventors captured the ephemeral, what escapes us like reflections, lights and shadows. Everything that had been kept up until now in the imagination of what had been seen, could be encrypted on a surface, allowing the world to be seen and shown in another way.

Photography grew, and like a true work of art retracing its own nature, it creates personal scenarios and different ways of seeing reality. Each image clearly evidences the experience of each moment captured.

This is how different points of view appear that make them protagonists of their time.

In this way we come to the world of the international photography art market today, where a unique copy of Man Ray became the price record for a photograph in May this year.

Man Ray (Philadelphia, 1890  Paris, 1976), whose real name was Emmanuel Radnitsky, was one of the founders of Dadaism in the United States, joining the surrealist movement in Paris when he managed to settle in this city in 1921.

He first dedicated himself as a photographer to immortalize his colleagues and friends in portraits in which special light effects endowed these works with a magical atmosphere. He became the official photographer of the most outstanding artistic and intellectual personalities. He portrayed among others Pablo Picasso, Gertrude Stein, Marcel Proust, Constantin Brancusi and many more.

In the spring of 1922, he exhibited his rayographs for the first time in Paris, which were a kind of photography with ready-made characteristics, a procedure that consisted of producing images of reality through the same objects, without the intervention of the artist and even without camera. They were impressions of different things on photosensitive paper. Rayography with his object (he left only his impression) was limited to being an effect of the light itself. Apparently, it was a random work that created itself. It was an image of investment and something strange, a concept that responded perfectly to surrealist thinking. These unique pieces have obtained very interesting prices in the international market from the moment of their creation to the present day.

In 1924, the same year in which Pettoruti exhibited his futurist and cubist works at the Witcomb Gallery in Buenos Aires with a wide rejection by the public and with the sole support of the magazine Martín Fierro, Man Ray portrayed his muse and lover Kiki de Montparnasse in one of the most significant images of surrealism: Ingres's violin. In the female nude from behind, the artist draws two painted acoustic openings on the middle part of the body, using the model's curves as the sound body of the violin. It is important to think about the importance that the cubists gave to stringed instruments. In their still lifes they included mandolins, violins and guitars. Although in these cases these objects were compositional material with no life of their own, in Man Ray's photography an effect of great eroticism is immediately produced, evoking the sensual bathers of Jean Auguste Dominique Ingres, recognizable by their oriental turbans and their almost perfect bodies. 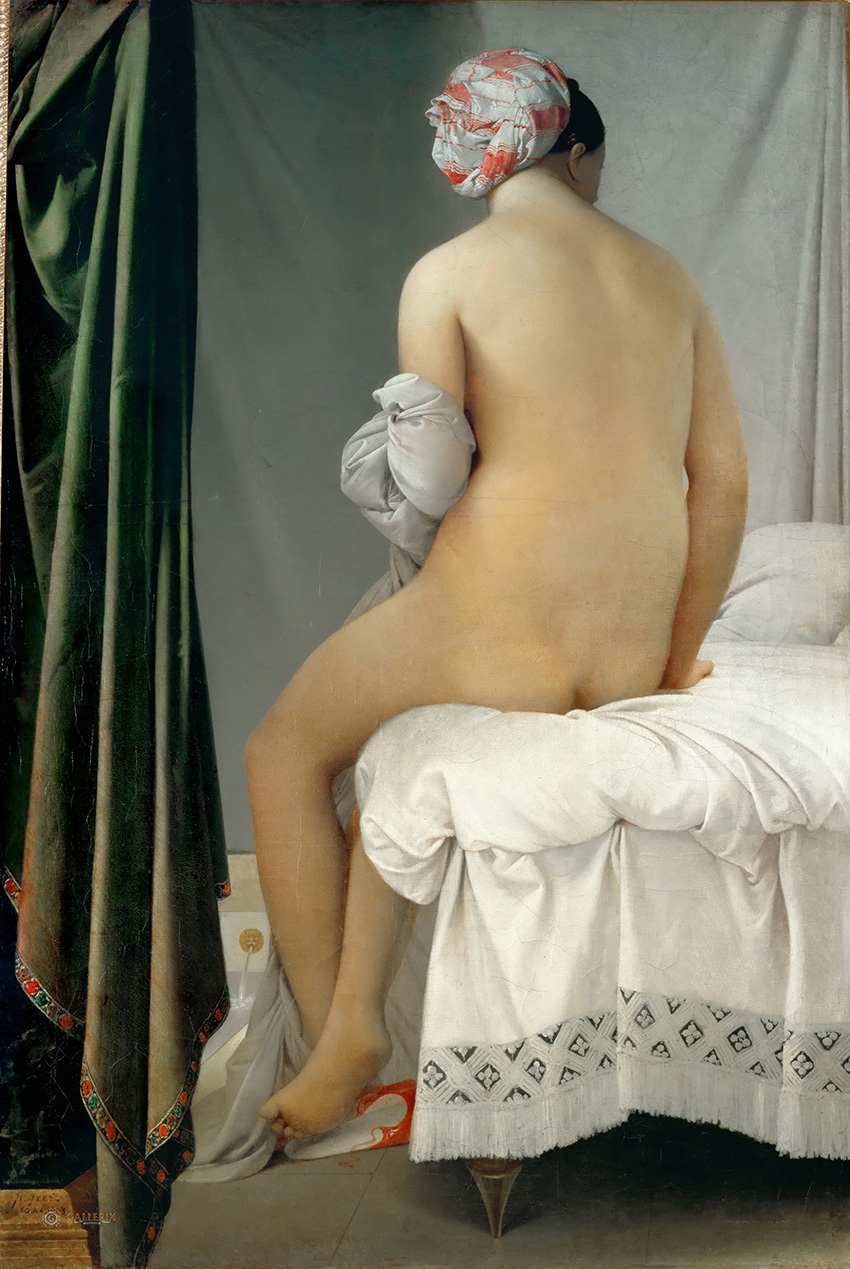 La Baigneuse Valpinçon (The Bather) oil painting by Jean-Auguste-Dominique Ingres painted in 1808 and which inspired Man Ray for his photography.

On May 14, 2022, Christie's in New York auctioned off this iconic piece as part of Christie's Spring Marquee Week, which was acquired by an anonymous buyer for the sum of $12,412,500. The selling house estimated that they could raise between 5/7,000,000 dollars, but the work far exceeded the figure thought.

The 48.5 cm x 37.5 cm photograph was cataloged as silver gelatin, unique piece. It belonged to the collection of Rosalind Gersten Jacobs, a great patron and American fashion buyer, merchandise and marketing consultant, and her husband Melvin Jacobs. The piece is hand signed by the artist and dated 1924. It was acquired by the current owners from Man Ray in 1962. The work was exhibited for the first time at the National Library of Paris in the exhibition "Man Ray, the photographic work" -May / June 1962-, and for the last time at the MOMA in New York in 2010. A large number of exhibitions guarantee it and absolutely increase its traceability.

The big question is perhaps why this work was so coveted

Until then, the record price of a photograph had been Peter Lik's controversial "Phantom", which was auctioned in 2014 for $6,500,000.

In this auction where Le Violon d'Ingres appears, there were buyers from 16 different countries by phone, online and several present in the room.

If we stop for a moment in history, the First War had ended and the world had entered a great transformation. Within this framework, artists were looking for another way of looking at reality, and proof of this was this controversial image of Man Ray. If we accept a minimum of frivolity, the beautiful model, lover of several famous people of the moment, hypnotized all eyes on her as the protagonist of the sensual tribute to Ingres. But in this era where there were no absolute answers and everything was question, Man Ray became a clear example of these uncertainties.

He knew how to transform a photograph into a rare combination of painting and sculpture at the same time, where the magic and technology that existed in his time allowed this transcendental image to emerge.

Although many subsequent copies of this photograph were made, the relevance of this vintage copy lies in its important background, in the origin of an excellent collection of photographs acquired directly from the artist by the Jacobs couple, in the veracity of the verifiable references , and in the multiple exhibitions in which it was exhibited. This is added to a fundamental reason for any item in the art market, but especially in photography: the credibility and trust that the seller brings.

But a few days before this big sale, at the Stahl auction house in Hamburg, a 30 cm x 24 cm print made in 1991, that is, after several years of the artist's death, was auctioned for 528 dollars.

With these data we can reach the conclusion that, in the world of photography, where we are not talking about an authentic or false work as in the case of painting, the credibility of the selling house is essential, and the background of the piece that guarantee its age and the number of copies made.

It is interesting to note that sales records of Man Ray's photographs are known from 1985. Already in those years a portrait of Picasso, owned by the artist's widow, 29 x 22 cm, had an estimate of 18,000/22,000 dollars and was auctioned at 27,720 dollars, an important figure for a photograph in those distant times.

The deeper and more intimate reasons why this anonymous buyer bid "Ingres's Violin" up to that record price may never be revealed. But there were too many interested in it and the stage where it was auctioned is the center of the international art market. It is these investments that move us to ask ourselves perhaps too many questions for which we do not have so many answers.

What we can say is that the photography market is on the rise, and the percentage increases in prices are more than significant.

Although in the Argentine market the values ​​of photography have been consolidating in recent years, we are very far from achieving relevant or meritorious prices for the excellent photographers who have preceded us. It does not seem fair that contemporary photographers of Man Ray such as Juan di Sandro, Anatole Saderman, Grete Stern and his exceptional surrealist photographs, Horacio Coppola, in his remembered "Homage to Juan Gris" made in 1939, Annemarie Heinrich and her extraordinary portraits, the same Pedro Otero, are traded in values ​​still so distant from these records that are as successful as they are in the media.

If we follow the example of credibility and trust in the commercialization of photographs and when the conditions of the country and the art market are more favorable, possibly these great masters of Argentine photography will be revalued and, above all, much more recognized.